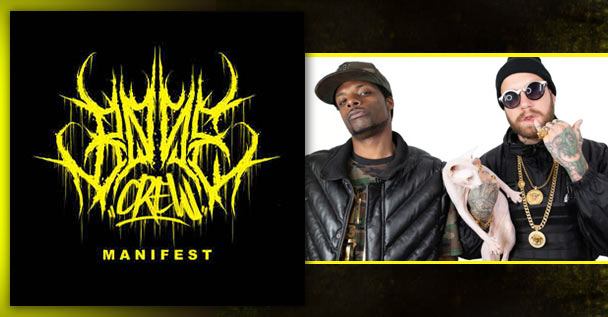 Background: Two years ago, Chris Fronzak from the party Metalcore Attila teamed up with rapper Da Boi J (and presumably a few other folks behind the scenes) to make a Trap Metal group called Bone Crew. They launched an EP around that time and now they’re back with a full album called “Manifest”. Let’s see what all it brings to the table…

This Album Sounds Like: A less solid, American version of Hacktivist or DVSR with generic rap lyrics… It’s like they listened to nothing but those bands, Three 6 Mafia, Volumes, and $uicideboy$ then promptly decided to mix them all together with… well… Attila.

Some Favorite Tracks: I honestly don’t think I can endorse any of these tracks and their entirety. But I did enjoy the heavier moments on tracks like “Stack It”, “Roll”, “Big Bank, “Top” and some others. I suppose it was also amusing that the generally not-so-serious Riff Raff showed up on two tracks.

Positives: There are some tight n’ djenty metalcore grooves on this album. It gets a tad nasty at times. Fronzak’s delivery could also be tight. His harsh vocals are well practiced and personalized – in a world where many vocalists essentially sound the same, you know you’re listening to Chris Fronzak when you’re listening to Chris Fronzak. To a point, I can also appreciate the energy behind this record. You can tell it’s meant to be fun and not much more. The production is great. Everything comes through crystal clear and has a nice punch to it.

Negatives: Cheesy lyrics. I swear all the lines on this album were written by pulling tropes out of a hat. Fronzak and Da Boi J’s contributions weren’t great in this regard. Honestly, the latter didn’t do much for me at all standing as an average rapper at best (same for Fronzak most of the time). The trap beats between the metal sections feel like forgettable placeholders that were just copied and pasted in. For a record fusing two generally different styles of music, there really isn’t much creativity to show here. I approached this with an open mind but, ultimately, it didn’t win me over. However, I can objectively see how people would enjoy this – so maybe you will.

In The End… I guess Chris and Da Boi J would put me under the “hater” category half the god damn lyrics are dedicated to. But I don’t have enough energy to hate this project – I just didn’t enjoy it much at the end of the day. I’m sure others will love it and das cool. I’m personally feeling a 4 out of 10 for the new Bone Crew LP. But enough about my opinion – give a listen through the music videos across this page and see what you think.