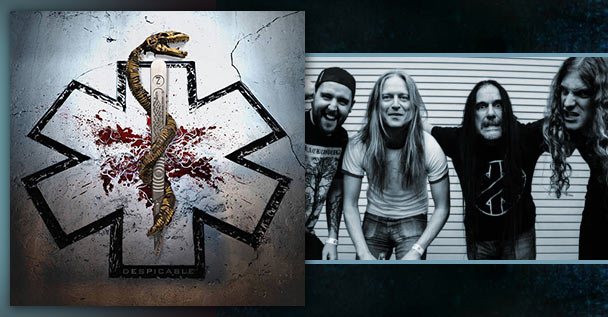 Background: Innovators and legends alike. Carcass have been a staple of extreme metal music for decades now, influencing countless individuals while planting several flags across the map. Having made considerable changes from their origins, this UK-based juggernaut has settled into a (Melodic) Death Metal groove in more recent years. They had made their return after 17 years with 2015’s “Surgical Steel” and now, they’ve followed it up with an all new EP offering “Despicable” which we’ll be dissecting today. SCALPEL!

This EP Sounds Like: A reminder from Carcass of how they’re some of the best to ever do this. They have such a distinct yet evolved and accessible sound, progressing just as any masterful band should. This is a recently deadened beast clawing its way out of a morgue to the delight of metalheads the world over.

Some Favorite Tracks: There’s only 4 present and I greatly enjoyed all of them from the more straight-forward to the more angular moments present. Also, let’s just sit back and admit “Slaughtered in Soho”, “The Living Dead at the Manchester Morgue” and The Beatles inspired “The Long and Winding Bier Road” are amazing song titles (and amazing songs to boot!)

Positives: From the very first instrumental hit, the scale of this album becomes apparent – coming through with beautiful, menacing clarity that is further weaved through Carcass spinning their craft. The instrumentals on this thing translate with deadly technicality without going over the top. Every moment counts as Carcass drive their point home. Jeff Walker’s voice runs over the top like a blade, slicing at the ears with its grisly tone. It all just makes for a solid, well-balanced modern metal experience. As hinted, the production also brings it all through professionally with a stand out job. Two thumbs up for this “Despicable” release.

Negatives: EPs like this always leave me wanting more. That’s all really. And it looks as if we might just get that! Huzzah! It was announced that this is merely a taste of what’s to come with the band’s 2021 full-length effort. If this is only a cutting room floor appetizer then hot damn!

In The End… Just an all around excellent effort that we metalheads don’t deserve. Carcass are here doing what they do best and I’m all for it. I imagine this will be in rotation for quite some time and also prompted me to revisit some previous work from the band. Joyous days! My gut wants to push this one to a very high 9 out of 10… so be it! Give the goods a listen through the links on this page and prep for what comes next!