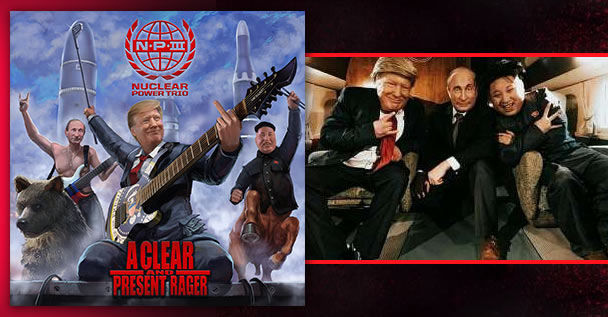 Background: With the power of three [but really two] dictators combined, let there be funky shred metal! Nuclear Power Trio is a [joke] band consisting of Russia’s Vladimir Putin, North Korea’s Kim Jong-un and Donald J Trump from the US of A. With their arsenals stockpiled together, they are the NUCLEAR POWER TRIO! [In reality, this is the super group consisting of bassist Nick Schendzielos (Job For A Cowboy, Havok, Cephalic Carnage), guitarist Greg Burgess (Allegaeon) and drummer Pete Webber (Havok) but don’t tell the dictators I said that.] They recently forced Metal Blade Records to release their debut EP at gunpoint! It goes by the name of “A Clear And Present Rager” and we’re here to tell you about its superiority… also at gunpoint!

This EP Sounds Like: World peace? Pffft. Nah. Someone must have pressed the red button ’cause this thing is 100% radioactive. “A Clear And Present Rager” is masterful freaky-funky-fusion metal music filled up like a can of earworms ready to go fishing. This is a [supposed joke band / side] project pretty much kicking the ever-living shit out of everyone.

Some Favorite Tracks: Every track on the EP is amazing for one reason or another. There’s not a single weak leak present so take that for what it is. Oh, and the song titles are amazing with such gems as “Grab ‘Em by the Pyongyang” and “Ukraine in the Membrane”.

Positives: I’m reading from cards now… The three dictators want me to say this record is perfect. This is, without a doubt, the best EP ever released. All the other bands can quit now. Nuclear Power Trio have music covered from here on to eternity. [In all seriousness, the talent on this record is off the charts. The instrumentals they’ve put together are just magnifique and the polish on this record really everything shine. In my mind, this is a surprising yet not-so-surprising contender for one of the strongest instrumental releases this year.]

Negatives: The three dictators dared me to say something negative… I politely declined. [Buuut how can one EP possibly contain so much talent!? This is physical impossibility. I would love to hear an hour’s worth of this but we got ~19 minutes to work with. On one level, it’s kind of sad that a gimmick has to be used for this music to be heard but it also kind of covers for some of the more objectively cheesy moments as things veer into… I don’t know… Power Rangers territory? Beyond that, it’s kind of hilarious.]

In The End… In their great mercy, the grand leaders have graciously informed me if I don’t get this album an 11 out of 10, I will be summarily executed. So, without further adieu, “A Clear And Present Rager” gets the first ever 11 out of 10 on this site! Our leaders are strong. Our leaders are wise. They wrote this with their eyes closed and hands clasped behind their back. We all bow before it and weep.