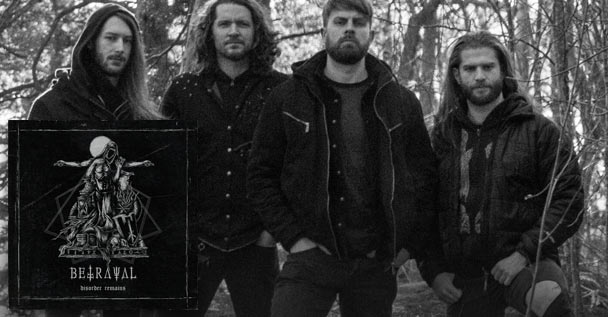 Although the term modern death metal hasn’t become a “dirty word” per se, oftentimes the connotation implies something that imitates solely, while often not offering much of an experience that is solely their own. Like their fellow labelmates Rising Nemesis Records labelmates Pestilent Reign, Betrayal adeptly draws from a mix of old-school death metal, thrashy death metal, technical and progressive death metal, and a bit of blackened death metal to create some seriously awesome and well-written death metal. The end product is something that’s solely Betrayal’s, and it’s a good take on death metal that you’ll certainly want to hear.

Betrayal – Disorder Remains will strongly appeal to fans of Misery Index, Revocation, Death, Behemoth, and Decapitation at their grooviest.

Betrayal comments on the release of Disorder Remains:

“Regarding sound quality as well as songwriting, we definitely reached the next step with Disorder Remains. The entire writing process was new for us since a part of the record was finished in the studio where we could focus on our concept and implement a lot of spontaneous ideas. We tried to combine a gloomy and powerful atmosphere which can be transferred live as well as on CD. It was recorded at the Unleash The Sound Studios while sounds for guitars and bass were created by no other than Sky Van Hoff. With this decision, we try to underline the intensity of emotions throughout our songs with a brutal sound.”

Founded in Aschaffenburg in 2005, BETRAYAL soon released ‘Of Lust And Loss’ in 2007, an EP that stirred up the local underground, sold out on the day of release and showed the potential of the young band around drummer Manuel Caccamese.

After several line-up changes, BETRAYAL found themselves together again in 2014. With Alex Burkl on rhythm guitar/vocals and Philipp Gherig on bass, a foundation was finally laid to build a golden future on. They quickly drew attention to themselves again with a demo in 2015.

In 2016, eleven years after the band was founded, BETRAYAL released their first album ‘Infinite Circles’ on Transcending Records. They were able to gain many new fans and received nothing but great reviews. About 200k Streams on Spotify can confirm that.

With their new addition Bastian Kraus on Lead Guitar in January 2019, they not only got fresh blood but also musical quality and creativity on board.

On numerous festivals or as touring support act for bands such as Belphegor, Suffocation, Hate, Cannibal Corpse, Thy Art is Murder, Asphyx or Gruesome, they shared the stage with a lot of notable bands and were able to expand their fanbase successfully.