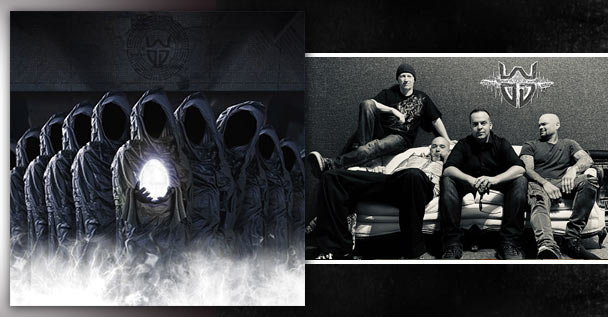 Fusing Metal and Rock is not something new in the industry. As a matter of fact, many deem this blend to be formulaic and distasteful – branding them as “Modern Metal”. But, in my opinion, some bands master this mix, and while doing so, they try not to be stereotypical – yet, putting out something original. Recently, I came across a Sacramento quartet – Waves of Distortion, and I believe they are the ones closest to the foretold description. One of the reasons as to why they were about to cultivate such an original sound, is how they got together as a band – from varying backgrounds and experience.

The idea for Waves of Distortion was put forward by guitarist Brennen Von Slack. The vision was to combine the heaviness of Metal with a distorted melodicism and droning clean tones. Bassist Glen Evans was the first one to join Slack, and together they started searching for a drummer. That’s when they got to know Brennen – who, at that time, was taking a brief hiatus. Brennen liked the idea and joined the two immediately. Lack of vocalist didn’t stop the trio from starting their collective writing. The three musicians jammed together, and when they had a handful of demos recorded, the drummer recommended Josiah Fox as a reliable vocalist, with whom he has played before. It only took one session for Josiah to sign up with the gang – and finally, Waves of Distortion became a full-fledged collective.

“Race Against Time” is the band’s first album, and it was initially scheduled for 2020 release. However, adhering to COVID restrictions, the album never saw the recording room, until 2021. After a year-long wait, the band finally released the album on March 21. The album flaunts 9 tracks, all of which epitomises the band’s vision. The title track – “R.A.T” is the first track of the album and the first one that gives the listeners a gist of the said vision. Straight of the bat, Josiah’s growls are put to full display, topped with a heavy yet catchy guitar riff. While Vocals and Guitars steal the show, the drums drive it forward with a rumbling, syncopated tone – complimenting and not-shadowing the rest of the instrumentation.

While the second track, “Lotus” shows off the band’s inclination towards a more Rock sound with clean singing and melodious guitar work, the third track, “Original Sin” – starts with a slow intro that quickly transcends into a proper radio-friendly melancholic vocal before the instruments, heavily influenced by the heavier side of Rock/Metal, starts pulling the track into the realm of Heavy Metal. But, this is short-lived as the cleans pull back. There are a lot of back and forth on this track, which makes this an interesting listen – perhaps one of the best tracks on this album. The fourth track, “Guardians Enemies” circle around the same structure of “Original Sin”, but you get to listen to a more enraged Josiah here.

“Chemical Dependency” is a track that I believe is one of those that slowly grow into one rather than being an instant attraction. The reason may be because of the transitions all along the 5 minutes of the track – it is like mixing a proper Progressive track with metalcore and rock guitar riffs. You’ll find some shabby transitions at the beginning, but the song ended strong with Josiah’s clean break – making it worth a dozen listens!

The second half of the album shows the innovative side of the band, with songs like “Ghosts and Flies”, “One Last Goodbye” and the final track “Note to Self” – portraying many faces within Rock and Metal, to drive the song to a more experimental side.

An overlooked aspect of their album, in my opinion, is lyricism. I mean, in recent times, lyrics haven’t spiked much interest within listeners as much as a solo does. But, talking about the lyrics of this album is quintessential before we judge the overall goodness. The songs are written in such a way that the positive message is hidden within a negative. Like how on the opening track, the band sings of how the world around us is crumbling down – making it hard to move any further, but the only way out is to give up – in hindsight, there is a message of how one should move forward no matter how big the obstacles.

Overall, “Race Against Time” is an album that will pique interest to those who like listening to Rock and Metal offshoots with an intent to bring something new to the table. Of course, that band is yet to mature, but it seems as if they have found the right tone for them – which is more than enough for a new band. I mean, once a band locks in on a sound, it is not that hard to develop. That being said, I will be definitely looking forward to their next album – hopefully, there will be a lot more experimentation in the display.