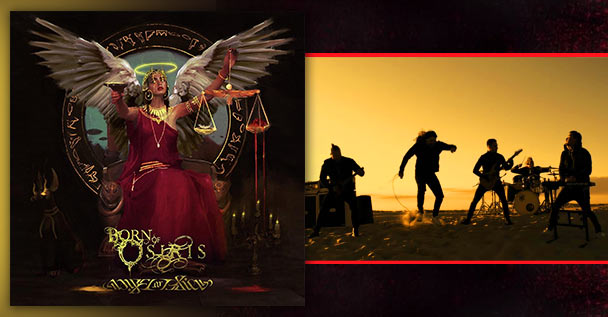 Born of Osiris is a band that has been synonymous with the (Metal) musical journey of listeners such as me who cut their teeth onto the genre with the slew of new artists making waves at the time- BOO’s fellow city-Metallers Veil of Maya, Periphery, TesseracT, Animals as Leaders, After the Burial, etc. In this new crop of musicians, we found a subgenre to call our own, our contemporary- as our previous generation had laid claim to NWOAHM and Gothenburg sounds. To witness Born of Osiris’s remarkable journey from the days of ‘The New Reign’ to ‘Angel or Alien’ is a full-circle affair.

‘Angel or Alien’ sees Born of Osiris play to their strengths, giving listeners, new and old alike, a whopping list of 14 masterfully crafted tracks to chew on this time around. The full-length record is a love letter from the band to Metalheads who love their Progressive Metalcore, infused with a generous dollop of Electronica and Djent similitude. ‘Poster Child’ kicks off the tracklist with a balanced serving of Synthesizer-heavy choruses, tightly syncopating drums, and polymetric lead and rhythm guitar-pairing to back up the assault throughout the verses. ‘White Nile’ received uncountable replays from yours truly simply for that absolute banger of a bridge section that saw the band plume out its melodic side. Upon closer inspection, the title track seems fully deserving of the hundreds and thousands of replays it has garnered since its single release with an accompanying music video; it does a fantastic job of primarily highlighting the band’s usual stellar musicianship, along with a riveting orchestral aspect for seconds. ‘Waves’ seemed more reminiscent of the BOO that put out ‘Tomorrow We Die Alive’, and frankly it was delightful to have a track, that in my humble opinion, played as a foil to the other tracks on the list- adroitly capturing the band’s ability to incorporate and exhibit their signature compositional templates through the ages, on a single album.

To sit and pontificate on every track on the album or every aspect of the album seems like an unnecessary spoiler to an epic story that deserves to be heard by everyone on their own. ‘Angel or Alien’ is end-to-end an early contender for the best Metal Album at least for me- which should tell you about what marvels await the rest of the tracks I have not dissected here under the microscope. The album shines with the maturity of the compositional arrangement depicted by the quintet, from the start to finish. Take the album-opener for instance- it is not just one of the many stand-out tracks now in the band’s oeuvre, but a composition that deserves full attention from anyone remotely enthused by sound design, especially given how the melody and energy of the outro complement everything that came before it. The band also takes a lot of liberty in crafting songs that drastically differ from each other in structuring- a statement that becomes more accurate as the listener progresses through the tracklist, to finally reach that unexpected Saxophone solo where the band signs off on the final track, ‘Shadowmourne’. The electronic sampling and synthesizer work further increase the appeal of each composition, by adding an unconventional orchestral flavor to each of them. Every track on the album routinely flirts with what seems like Persian scales at a glance, successfully retaining the mythical mysticism that parades alongside BOO’s dystopian, machine-like groove.

To be fair, it is not very difficult to review an album from a collective of musicians as polished and surefooted as Born of Osiris. Regardless of how their offering may appeal to your ears, they have always made no excuses about their direction on any album. While each of the albums between ‘The Discovery’ and ‘Angel or Alien’ are touted to by some as the ‘weakest’ of their oeuvre, the only legitimate reasoning behind that statement should be the fact that they set the bar extremely high with ‘The Discovery’. So, it is inevitable that any of their releases since draws comparisons with a benchmark Born of Osiris set for themselves with the 2010 album. Personally, all those albums offer something worth remembrance; but, they lacked that eternally memorable quality of ‘The Eternal Reign’/’The New Reign’ and ‘The Discovery.

However, with ‘Angel or Alien’, it is quite apparent that Born of Osiris has turned a fresh chapter, firing on all the cylinders that make them a force worth reckoning; be it the compositions, the arrangements, the production mix & master quality, or the lyrically thematic subject matter they have pursued throughout the album.