Go ahead and read that headline again. Your eyes don’t deceive you. Iron Maiden has released their own brand of beer! TROOPER BEER \m/

“TROOPER is a deep golden ale with citric hop notes and dominating malt flavours with a subtle hint of lemon. Real depth of character with complex hop notes using a combination of Goldings, Bobec and Cascade Hops.”

It should be noted the beverage is currently only available in Europe. But will be spreading to the rest of the world as soon as possible. It’s available for purchase here. You can read the official statement below for all the info and more.

Trooper beer was officially launched yesterday at Robinsons Brewery in Cheshire, with a reception attended by brewing trade representatives from both the UK and Internationally. As fans may have read recently, the unprecedented upfront demand for the beer meant Robinsons had to brew three times a day, six days a week for the first time ever in the Brewery’s 175 year history to cope with pre-orders in excess of 300,000 pints.. Robinsons were overwhelmed by the number of enquiries they’d had from all over the world and sent us a comprehensive listing of whereabouts the interest had been – from a staggering 184 countries! So, a big thanks to all our fans and it’s great to know the Maiden family extends into so many places where the band have never even had a chance to play before! For anyone interested, below is the full list of those countries.

Bruce and Rod attended the Trade Launch, which began with Bruce conducting a tour of the Brewery to explain to everyone first-hand the process of exactly how Trooper beer is made. Robinsons Managing Director Oliver Robinson then gave a short speech about how the Iron Maiden/Robinsons collaboration came about and he presented Bruce with a specially engraved Brewery hand pump, in recognition of Trooper being the Fastest Ever Selling New Robinsons Beer. Bruce then pulled the first-ever pint of Trooper from the cask in the Brewery bar amid loud applause from the assembled crowd. Everyone then got down to the serious business of tasting the beer for themselves and it was very well received judging by the number of smiling faces and approving comments heard around the room. In fact Robinsons’ own head brewer, Martyn Weeks pronounced it his favourite beer, and renowned beer writer Pete Brown remarked how he found Trooper to be very good indeed and extremely drinkable.

Trooper is now available to order online throughout most of the EU, and Robinsons are working flat-out to ensure it will be available to the rest of the world as soon as possible. For updates on when Trooper is coming to a pub, bar or supermarket in your town/country keep checking www.ironmaidenbeer.com or follow IronMaidenBeer on Facebook or Twitter.

To find out more about just how much the Trooper beer impacted on Robinsons brewery business, visit their website. 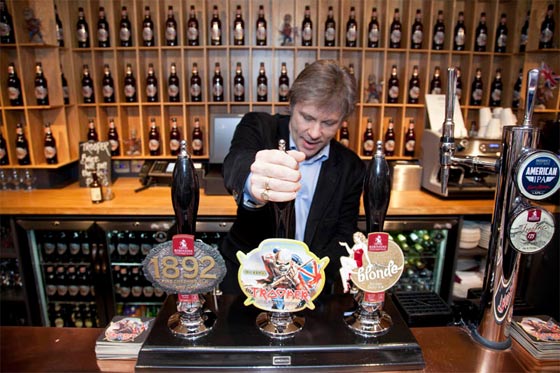