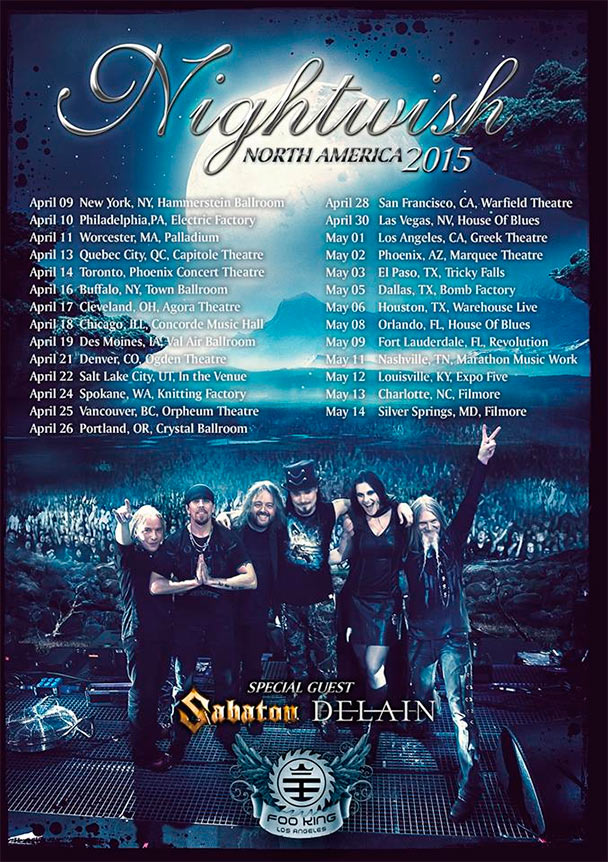 April 10, 2015 at the Electric Factory in Philadelphia, PA by Bill Stahl

For those of you who may not have had the chance to take in the show at the Electric Factory – picture a logo of Ben Franklin with a Mona Lisa smile – it’s a solid indoor venue that presents high quality live performances. Nestled in the heart of downtown Philadelphia, PA, it required about a 3 hour car ride for The Circle Pit crew to reach.

Unfortunately, we didn’t plan for the always fun travel conditions of the Schuylkill Expressway, fondly known to many as the Sure-Kill, and so arrived at the venue with not a lot of time to spare.  Mike and Jeff headed off to link up with the tour manager for Sabaton to get setup for their scheduled interview, and I wandered down the length of the queue to find the end and wait for the doors to open. And quite a queue it was. I’d been to the Electric Factory once before to see Nightwish in September of 2012, when they were touring with Kamelot as the lead in. I’d enjoyed the venue very much and was looking forward to seeing Nightwish again with two bands I wasn’t as familiar with: Sabaton and Delain. For this performance the queue was much longer, down the block and around the corner into an alley. Turned out I was in pretty good shape because people just kept flooding in and eventually the line lengthened and turned down another alley and out of site!

Once the doors opened the progress was fast and I soon found myself inside the venue. It really wasn’t very full yet and a lot of people were clustered around the vendors at the rear of the hall, so I drifted forward and found a really sweet spot not too far from to stage along the left side of the hall – close to where I knew Tuomas Holopainen, keyboards for Nighwish, would be setting up shop when it was time for Nightwish to take the stage.

Dutch symphonic metal band Delain was the lead act for the evening. I’d listened to some of their material on line and was impressed, but even more impressed when I saw them live. I had an expectation that they would be the ‘softest’ group that evening, and they were, but they brought an energy and edge to their live performance I hadn’t expected. Charlotte Wessels presented powerful vocals with strong backing by DELAIN founder and keyboardist Martijn Westerholt, plus band mates Otto Schimmelpenninck van der Oije Bas Trumpie (no typo, that’s really all one name), Timo Somers and Ruben Israel.

While Delain were in the middle of their set, I turned around to look back through the hall, and it was packed! Not sure what the capacity of the Electric Factory is, but the crowd had to be maxing it out. The venue was posted for no moshing or crowd surfing, and the fans complied. But with those restrictions in place, it was still a fairly high energy crowd, which only grew as the second group of the evening’s lineup took the stage – Sabaton.

Sabaton was another band that was new to me. They are a metal band out of Sweden who take a interesting, perhaps unique approach, to their musical inspiration. All of their songs focus on military themes and themes of war and conflict. It’s an inspired approach really – lots of material with potential to draw from themes across the centuries and around the world.

The crowd greeted them with chants of Sa-Ba-Ton, Sa-Ba-Ton, Sa-Ba-Ton, and the energy level ratcheted up a notch. Joakim Brodén, lead vocalist stormed on stage in his signature Mohawk, sunglasses and shirt with metal plates. The whole line up attired in urban camo pants with various black shirts stays close to the front of the stage engaging the crowd. Hannes Van Dahl on drums was of course tethered to his set further back, but based on the energy level of this band you get the impression if they could figure out a way to get Hannes out front with the rest of them, they’d do it! The rest of the front line along with Joakim consists of Pär Sundström on Bass plus Thobbe Englund and Chris Rörland on lead guitars.

There was a level of interaction with the fans and with each other that just made you sure these guys love what they do. Two things they did cracked me up.

You can imagine that with the guitar line up of Thobbe, Chris and Pär, they don’t need any help in that area. But vocalist Joakim told us he could play the guitar too, that in fact he was quite good… He managed to talk, I think it was Thobbe, into giving up his lead guitar so he could demonstrate. Guitar in hand, strap around his shoulder, and pick in hand, he stepped forward and began to play the classical guitar lead-in to ‘Smoke on the Water’ by Deep Purple. I’m still chuckling to myself. A stage hand was kind enough to bring another guitar out to Thobbe, who then proceeded to set his fingers to flying all up and down the fret board, including some over hand fingering! Having established who belonged on which instruments, they launched into their next song but Joakim gamely hung on to his borrowed guitar, giving them a three guitar front for a while.

The other thing Sabaton did that demonstrated their audience interaction was to reach out, almost literally, and bring a 10 year old girl named Madison up on stage. Madison had been standing right up front at the rail, and was obviously enjoying the show. I did think it was funny that she had a Delain shirt on, but Sabaton took her in hand and even gave her a pick at one point so she too could add to their guitar front! The crowd gamely modified their Sa-Ba-Ton cheer to Ma-di-son!

Then finally it was time for the headline act of the evening, Nightwish!

Nightwish is a symphonic metal band out of Finland, and they did not disappoint. The band has gone through a few changes in line up in recent years, but all leading to an even stronger stage presence in my opinion. The majority of their music and lyrics are written by founding member Tuomas Holopainen who is an absolute musical genius, not only in composition, but in keyboard performance. The groups guitar line consists of Emppu Vuorinen on lead and Marco Heitala –  he of the forked beard – on bass plus male vocals.

One of Nightwish’s signatures has always been an outstanding female lead vocalist. That was Tarja Turenen from 1996 to 2005, then Anette Olzon from 2007 to 2012. Both of these ladies were excellent, and brought their own vocal strengths to the group. A couple of hard acts to follow, but the bands current female lead – Floor Jansen – has risen to the challenge. Floor has an awesome stage presence, driving vocals with an impressive range and solid control, and the ability to put her own mark not only on new material but on older material as well.

A more recent tradition to the band is Troy Donockley who is all over the map instrumentally playing Uilleann pipes, low whistles, bodhran, bouzouki, and throwing in the occasional vocal.  Hey, I’ll confess, I don’t even know what a ‘bouzouki’ is! But let me tell you his addition to the musical range and complexity of the band is cool! Glad you’re an official band member now, Troy. My personal favorite instrument that Troy plays is the Uilleann pipes. They have a haunting, beautiful tone when played soulfully but are also capable of a driving Celtic spirit when plied more energetically.

Drummer Jukka Nevalainen is not touring with the band this year, nor did he play for the band’s newest album “Endless Forms Most Beautiful” which launched just this month along with their current North American tour. I believe Jukka is dealing with some heath issues and I wish him well and missed him. But the drum slot is being ably covered by Kai Hahto (Wintersun), both on the tour and the album.

Nightwish didn’t back away from the material from their recently launched album in favor of more familiar and older pieces. Seven pieces in their set were drawn from ‘Endless Forms Most Beautiful’.

One older number they presented in a very intimate manner was when Marco took center stage by himself on a stool with a double necked guitar and began playing and singing ‘The Islander’. The rest of the band eventually joined it, but it was a very different presentation of a ‘Dark Passion Play’ song that I enjoyed immensely.
Nightwish presented a great 15 song set, capped off with a double song encore of ‘Ghost Love Score’, a personal favorite of mine, and ‘Last Ride of the Day’.
It was a great night of music. If you weren’t there, it was a pity you missed it. And if you aren’t familiar with any of these bands, check them out! You won’t regret it.