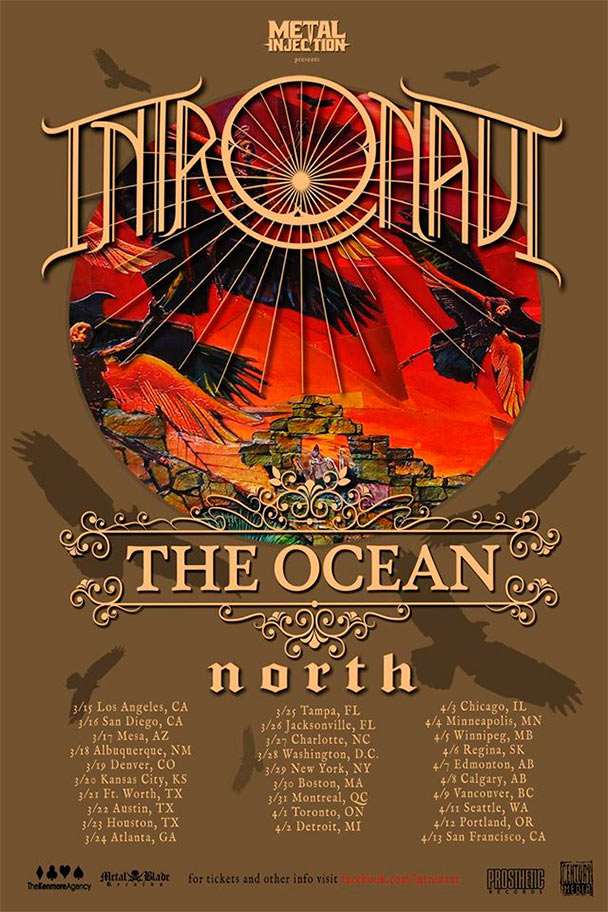 Intronaut, The Ocean, and North will be heading out on a tour of North America this spring! You can see all the dates on the flyer above and find music from all of the bands down below.

Here’s the official word from Intronaut:

“Intronaut would like to thank all you amazing people for your continued support of our band over the past decade, and especially with the release of our latest album. You guys are the best fans ever, and we’re lucky to have you! We are very excited to announce our first headlining run of 2016, with support coming from two bands we love.

The Ocean are a band that Intronaut has a long history with, as they helped us get our footing in Europe almost a decade ago, and we have played close to 100 shows with them over the years. They are an incredible live force that only gets better every time I see them, and we’re honored to have them do this tour with us. If you’ve never had a chance to witness their show, I highly recommend you not miss them on this tour. North are another band we have known for many years who have a crushing new record coming out this year. There will also be some great locals opening in many of these cities.

To give you an idea of our show, we are planning on playing all the songs from “The Direction Of Last Things,” as well as some songs from all our past records. We are also working hard on a beefed-up visual production that should take you from zero to I’m-freaking-out-man in record time.

See you all this spring!”