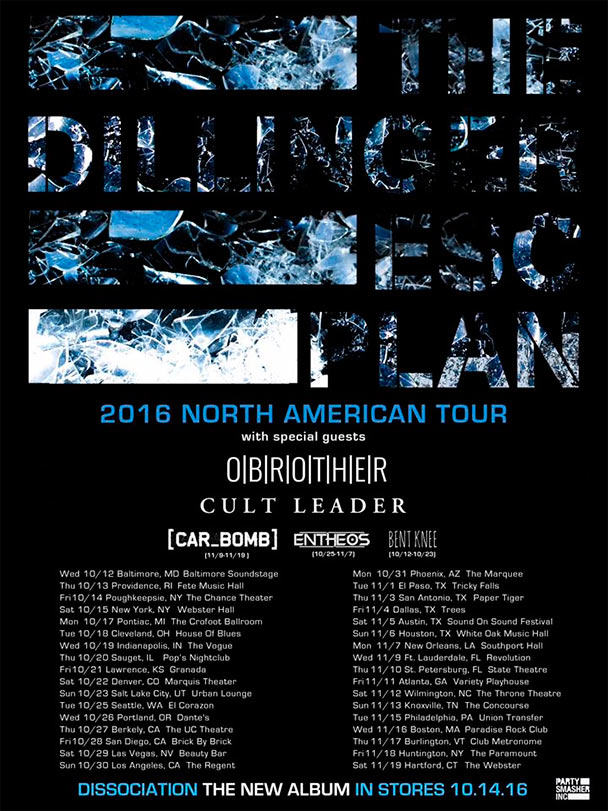 Even though The Dillinger Escape Plan will be formally calling it quits following their upcoming album cycle, there’s still a lot of life left in them! The band is currently planning their final touring runs and so far, they’re looking chaotic as can be. You can check out the flyer up above to get an idea and read over the statement from the band just below.

The end is near party peoplllllllllllle. But not yet… not yet. So we had all of the fun getting up close and personal with some of you in the tiny saunas… I mean venues… that we played over the last couple of weeks. There was no better way we could’ve chosen to start the beginning of the end than by getting back in the van and getting down to the slimy nitty gritty with some of y’all in some of our favorite cities. Thanks to everyone who came out and screamed and sweat and bled with us and checked their fucks at the door. So invigorating to play such feral explosive small shows after being dormant for a while. Sad to know they will be our last shows in venues that small and intimate but very meaningful to say the least. Full body chills/goosebumps every night to see you all go into a frenzy and scream along to the end of Limerent Death so soon after we released it. So, because we’re kinda hooked on this whole intimate show thing now, we’re doing another in the UK this week at Old Blue Last. This place holds 150 people….tickets go on sale today at 3pm. Not bothering to post a link, you guys’ll figure it out.

All shows go on sale this Friday 8/26. Support comes from O’ Brother, Cult Leader, Car Bomb, Entheos, and Bent Knee, depending on where you are on those last three.

UK, we’re headed your way. Old Blue Last, Reading and Leeds, bring it all on. We are gonna chew you the fuck up.

In other news, the band just played the infamous GWAR-B-Q in Virgina in which they were short of singer Greg Puciato. This was due to a cancelled flight. Regardless, the band made due bringing on sax man Bruce Lamont (Bloodiest, Corrections House, Yakuza) and local Virginia vocalist Dylan Lawson (Asylum, Dismantle the Architect, and Gage Asylum) to help the cause. As one may imagine, this made for quite the spectacle further pushing the fact that you never know what you’re going to get while watching The Dillinger Escape plan. Watch for yourself right here: