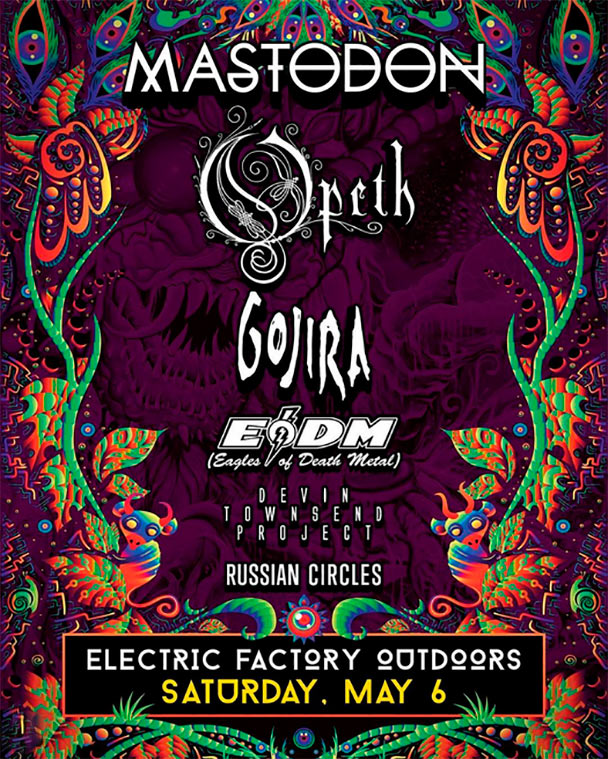 If you live anywhere near the Electric Factory in Philadelphia, you’re a lucky bastard. Arguably one of the best one off dates we’ve seen will be happening there.

The line up will consist of none other than Mastodon, Opeth, Gojira, Eagles Of Death Metal, The Devin Townsend Project, and Russian Circles… Damn….

This was announced when Opeth posted up the image found above on Instagram with the following statement, “What was originally a co-headliner between two unparalleled metal bands, Opeth & Gojira, has now grown to one of 2017’s biggest shows on the east coast. Electric Factory announces their first outdoor show of the 2017 season with Mastodon, Opeth, Gojira and Eagles of Death Metal, and the bill is rounded out by Devin Townsend Project and Russian Circles. This will be the only show of 2017 to feature this lineup, and the only time to see these six bands together on tour. In its 20+ year history, Electric Factory has been the Philly home to many of these bands, and they are thrilled to have them return. This show storms the Electric Factory Outdoor Stage on Saturday, May 6th and tickets are now on sale. All previously purchased tickets to the Opeth & Gojira show will be honored. For the full show details visit ElectricFactory.info”

In other news, Opeth and Gojira will also be doing a short tour together. Dates for that can be found by CLICKING HERE.

Here’s recent music from all the bands: