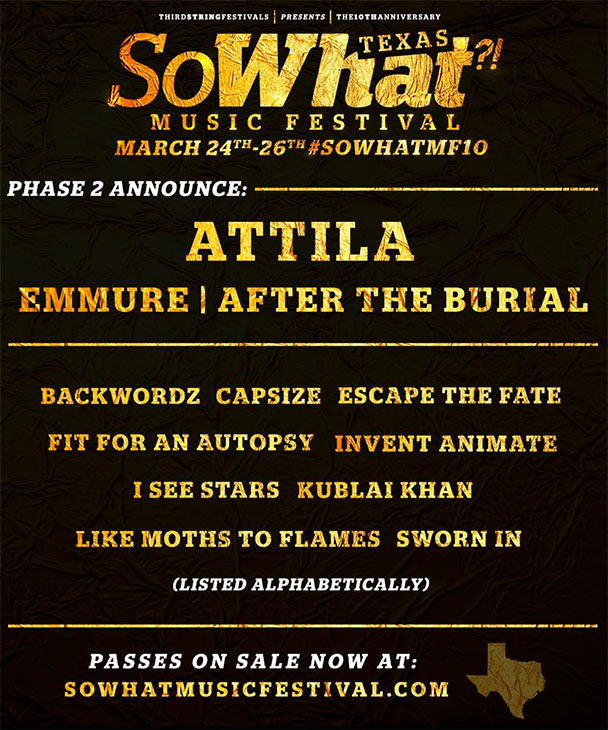 12 new band have been added to the Texan So What?! Music Festival. Here’s the official statement from the organizers in regards to this:

Third String Festivals recently announced the 10th Anniversary celebration of So What?! Music Festival taking place March 24th-26th. To celebrate this occasion in the biggest way possible, they will be taking over multiple venues in Deep Ellum on Friday, March 24th to kick off the weekend and then bring some of the best names in the scene to AirHogs Stadium (formerly known as QuikTrip Park) on Saturday and Sunday (March 25th and 26th). Expect lots of 10 year album celebrations, including Mayday Parade’s ‘A Lesson In Romantics’, Envy on The Coast’s ‘Lucy Gray’, and Forever The Sickest Kids ‘Underdog Alma Mater’, as well as the best current popular bands in the scene! The Deep Ellum shows will feature intimate “secret shows” from some of the festivals headliners as well plenty of other bands.

Today So What?! Music Festival is proud to announce the second round of artists including:

Attila
Emmure
After The Burial
Backwordz
Capsize
Escape The Fate
Fit For an Autopsy
Invent Animate
I See Stars
Kublai Khan
Like Moths To Flames
Sworn In.

The festival recently announced: Mayday Parade, Every Time I Die, Dance Gavin Dance, We The Kings, Set Your Goals, Chon, Envy on The Coast, Four Year Strong, Forever The Sickest Kids, and The Friday Night Boys. Additional announcements with all new artists will be revealed soon, stay tuned.

See More: After The Burial, Attila, Backwordz, Capsize, Emmure, Escape The Fate, Festival, Fit For An Autopsy, I See Stars, Invent Animate, Kublai Khan, Like Moths to Flames, So What?! Music Festival, Sworn In
« After The Burial Has A New Bassist
R.I.P. Adam Sagan (White Empress, ex-Into Eternity, etc.) »