This is truly shaping up to be another great year for metal! None other than the experimental death metal masters of Artificial Brain will be making a return on April 21st. That’s the release date for their new album “Infrared Horizon” to be released through the good people at Profound Lore Records. Pre-orders for this beast are currently available to those who CLICK HERE.

In support of this upcoming LP, the band has released their first single “Synthesized Instinct” and to say it hits hard might be an understatement. Absolutely fantastic introduction from Artificial Brain which deserves to be on repeat. Enjoy!

Here’s the official word from Profound Lore Records in regards to this impending release. The official album art can also be found below:

ARTIFICIAL BRAIN have completed work on their new album “Infrared Horizon”, targeted for release on April 21 on CD/LP/Digital. Pre-orders for “Infrared Horizon” can be obtained via the ARTIFICIAL BRAIN pre-order portal HERE (Canadian customers wanting to order the vinyl, we’ll have all colours for sale through our website closer to and/or around the release date). Also check out a new song “Synthesized Instinct”.

With their second full-length album “Infrared Horizon”, Long Island-based death metal band ARTIFICIAL BRAIN have created a sophomore release more advanced than their lauded debut album “Labyrinth Constellation”. By taking their brand of singular brutal guttural yet technical and ambient sci-fi death metal to a new galaxial plateau, “Infrared Horizon” sees the sonic architecture laid down by the band go further into the beyond and infinite.

Conceived in 2011 and featuring guitarist Dan Gargiulo (Revocation), vocalist Will Smith (Afterbirth, Buckshot Facelift), bass player Samuel Smith (Luminous Vault), guitarist Jon Locastro, and drummer Keith Abrami the band initially dropped their initial 2011 demo and their “Butchering Cosmic Giants” EP. The band would then align themselves with Profound Lore Records and release their debut album “Labyrinth Constellation” in 2014 to wide praise within the circles of death metal that range from accolades from within technical, dark, guttural, and progressive death metal respectively. Along with decent touring around “Labyrinth Constellation”, the band would also have their music played and were even name dropped on multiple occasions in the popular CBS television shows Elementary and Limitless.

Once again produced by Colin Marson (Gorguts, Dysrhythmia, Krallice) at The Thousand Caves, “Infrared Horizon” (featuring art by Adam Burke) sees ARTIFICIAL BRAIN traveling towards a sonic realm where the music has become more brutal and dissonant, technical, atmospheric, and just overall more otherworldly. Delving into the lyrics and themes of “Infrared Horizon”, themes such as dealing with the concept of a dystopian future in which robots and cyborgs have outlived human beings. Robots and Cyborgs who believe themselves to be not of creation of the long extinct humans but a more perfect evolution of them. 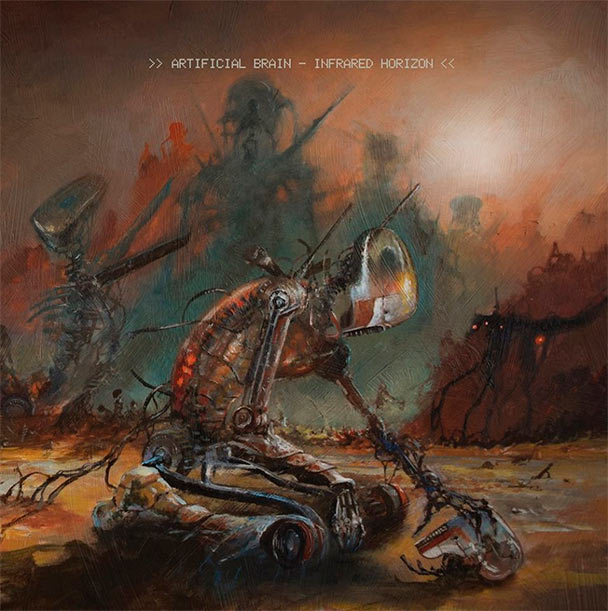