Gruesome proved to be one of the most exciting Death Metal units to emerge in recent history. What has made them so conceptually brilliant was their emulation of the band DEATH – the beloved godfather’s of the sub-genre. Better yet, they boast a heavy hitting line-up of musicians including members of Exhumed, Possessed, Malevolent Creation, and Derketa. They first struck hard with the release of their debut album “Savage Land” then followed up with their EP “Dimensions of Horror”. And, from the looks of it, they’re no where near slowing their roll…

Currently, the band is planning the release of a new EP by the name of “Fragments Of Psyche”! This will be released on March 31st through Relapse Records with pre-orders currently available to those who CLICK HERE. This will include a number of tracks from all new songs to reworked Death tracks and beyond.

In support of this, the band has released a brand new track by the name of “Fragments of Psyche”. This can be found down below.

Matt Harvey (also of Exhumed) had the following comment in regards to this:

“We are super psyched about this EP as it features a very, very special guest: Mr. Sean Reinert who did an incredible job on the tune we wrote for him. I can’t even express how humbled I am to have such an incredible musician and equally great dude as Sean playing on one of our songs. Having Sean do this with us really makes it feel like we are honoring the legacy of Death in the best way that we collectively know how.

This EP is all about connecting the different eras of the Death discography and also bridging the Gruesome sound into new areas moving forward. It’s only fitting that we pay homage to the Leprosy record with this “Humanized” reimagined version that Gus and Dan did a fantastic job arranging.

We are really excited to continue paying tribute to Chuck‘s work in all the different eras of Death as we move forward with Gruesome. We hope that you enjoy going along with us, thanks for checking out our tunes and let the Death Metal Flow.” 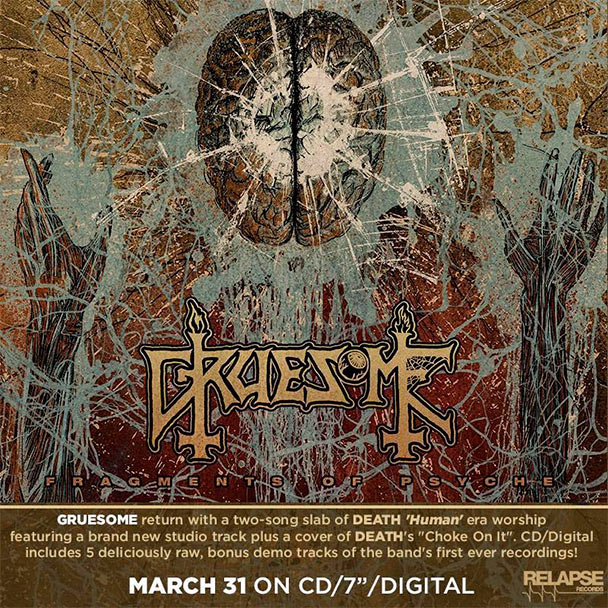