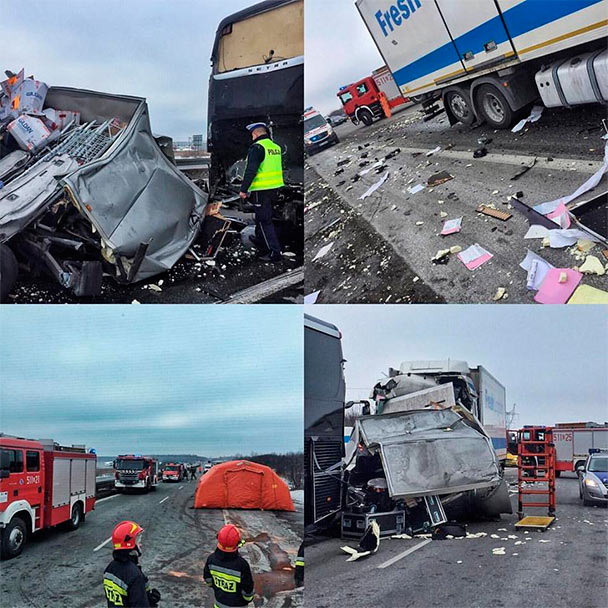 The Dillinger Escape Plan were involved in a bus crash during their final tour of Europe. The collision occurred in Poland and resulted in the hospitalization of 13 individuals. None of the band members are in critical condition. They released the following statement in regards to this along with the pictures up above:

By now I’m sure many of you have already heard the news, but we wanted to communicate to you all directly. Not just to express the fact that nobody is in critical condition, but to express our gratitude to the fans who have seen us or who were going to see us on this tour, the crew who was also in the accident with us and part of why things have been going so smoothly, the various promoters and venue staff, Live Nation Poland who have been so helpful in the last 38 hours, the many police and medics and emergency workers who came to the scene, the hospital workers, and the friends and family who have reached out to us personally since yesterday morning.

We were in the middle of playing some of our favorite shows we’ve ever played, and having a better time on and off stage than we have in a long time.

We were ripped out of sleep at 8:25AM to what still feels like a lucid nightmare. The cacophony of metal bending and things breaking and people screaming and what felt like being hit by a missile. Without going into detail, not everyone is out of the hospital yet, some of us are hurt worse than others.

Questions like why did this happen, why are we alive and others not, why are the people from the Bay Area fire dead, why at all is anyone here or not. What the hell is all of this. Remember how valuable life is. We are all lucky to be alive. To just have any time at all.
Anyway, thanks to you all for caring. We were truly having an amazing time and we’re blessed to have you all, such a high caliber group of people. It’s been an honor to play these shows, but we unfortunately have to cancel the remainder of them. We will reschedule every one that we can, and we’ll update more when we can. – Greg, Ben, Liam, Billy, Kevin