In celebration of Peaceville’s 30th anniversary of operation, there will be quite the 7″ split heading your way! Autopsy vs Bloodbath will be released on December 15th. Not that this is a limited eition split. Pre-orders are currently available to those who CLICK HERE.

Bloodbath will be covering Cancer’s “Blood Bath” and Autopsy will be doing “a cover song of a cover song” with “Fuck You!!!” by the 80’s band also named Bloodbath – which once included their guitarist Danny Coralles.

Bloodbath said the following of their work:

“Most of you would know this already, but for those of you who don’t, it was the title of the first song, on the first album by UK death metallers Cancer, which we originally lifted our band name from. Now with Peaceville celebrating its 30th anniversary, there would be no better token than offering this cover song to glorify the old school, brutal and trashy death metal legacy of Cancer fucking Cancer, once more! And as if it couldn’t get any better, we’ve the honor to split these seven inches with gore legends Autopsy who also bathe in their own blood!”

Likewise, Autopsy had the following to say:

“‘Fuck You!!!‘ is a cover song of a cover song….and the only song we’ve ever considered covering. Eric and I loved the version that Danny‘s old band Bloodbath did before we even knew Danny, let alone knowing that he’d end up joining Autopsy. And Danny didn’t even know it was a cover song at the time! Got it? It’s a crazy world and a crazy song.

It’s also a cool tribute to Dane Petersen (R.I.P.), the original Bloodbath vocalist. We feel we gave it the treatment it deserved….now it’s up to you to crank it up and hold those middle fingers high!.”

Here’s one of the original tracks to give you an idea of what’s to come! Unfortunately, couldn’t find the other… Anyways, stay tuned… 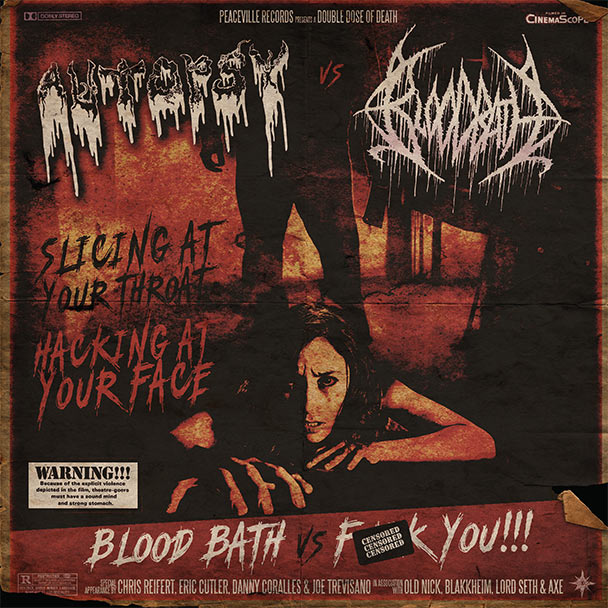