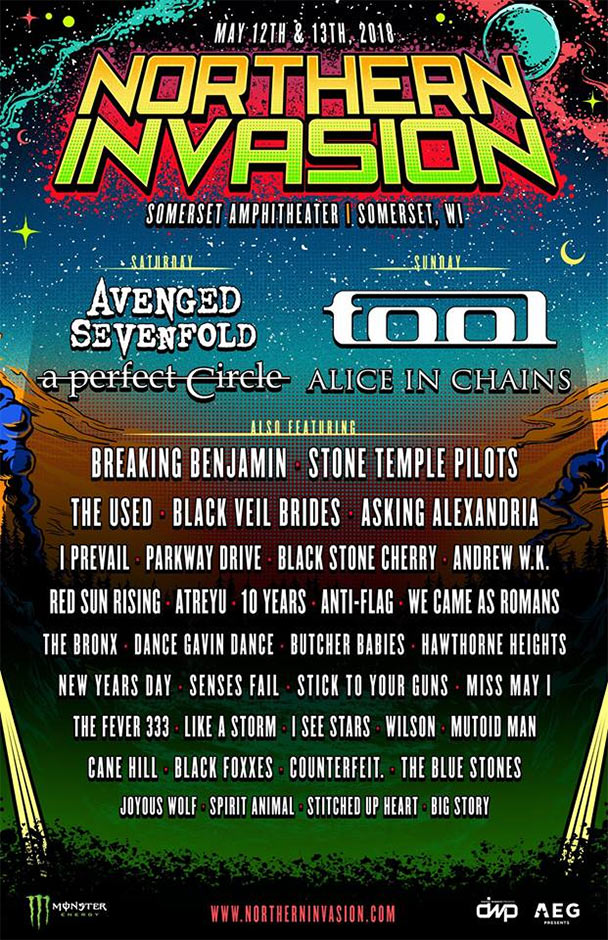 Northern Invasion 2018 has been announced! The festival will be taking place on May 12th & 13th at Somerset Amphitheater in Somerset, Wisconsin. You can find the bands on the flyer up above and get more information over on Facebook and the Official Website. Few surprises in there! Here’s the official press release:

Tool, Avenged Sevenfold, A Perfect Circle, and Alice In Chains lead the incredible lineup for the fourth annual Northern Invasion, Saturday, May 12 and Sunday, May 13 at Somerset Amphitheater in Somerset, Wisconsin, just outside the Twin Cities.

Northern Invasion 2018 will be bigger and better than ever with over 12 hours of music per day from the biggest and best rock bands on three stages, as well as a top tier camping experience. The Northern Invasion Good Eats area includes food offerings from top regional and national restaurants and vendors.

Maynard James Keenan of Tool and A Perfect Circle said, “Looking forward to playing material from the new A Perfect Circle release at Northern Invasion. Bringing new songs to life in a live setting is always exciting.”

The music lineup for Northern Invasion 2018 is as follows (subject to change):