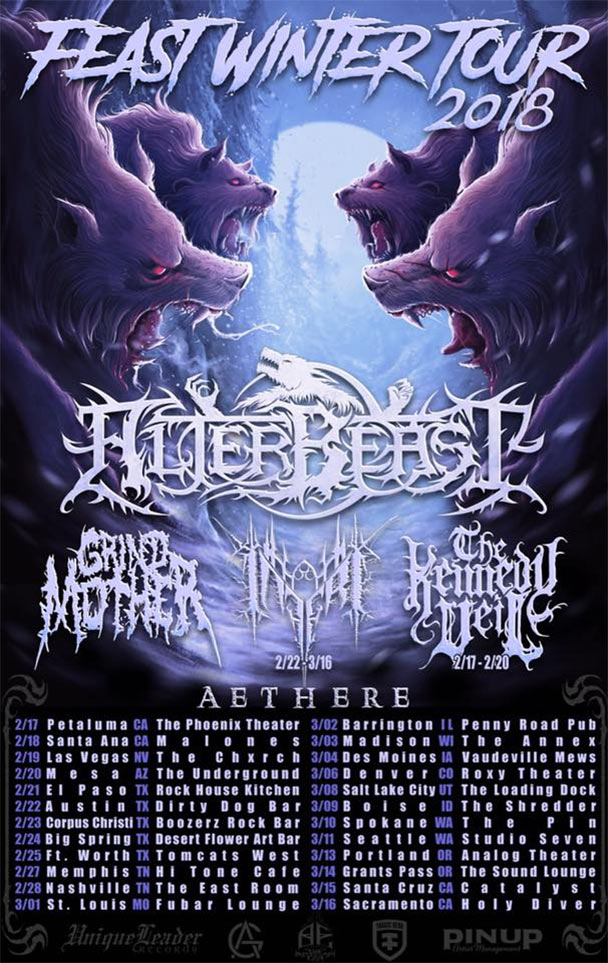 Mighty forces are colliding for what is sure to be a great United States tour! Alterbeast will be leading the charge in support of their new album “Feast”, out February 23rd (Pre-orders available HERE). In this venture, they’ll be supported by none other than The Grindmother, Inferi (2/22-3/16), The Kennedy Veil (2/17-2/20), and Aethere. These are sure to be some great times so hit a show if you’re able! All the dates can be found on the flyer up above and music from all the bands can be found down below. You can also look over parts of the official press release right here:

Guitarist and founding member Andrew Lamb had this to say about the tour, “We are excited to announce the Feast Winter Tour 2018 w/ special guest Grindmother, Inferi, The Kennedy Veil, and Aethere! After recording what we think is our best record yet, the pack is gearing up to hit the road this February and March in support of our new record. We are taking some ultra dope bands with us to shred for 24 nights of blizzard level blast-beats, ice berg sized riffs, and cold, frost-bitten howls that will leave you numb to the world till you thaw out this Spring! We will have some new merch designs EXCLUSIVELY for this tour as well as copies of FEAST on CD/vinyl before it’s released of February 23rd! Roll out to a date and go BEASTMODE with us! Wolfsiiiidddde!”

Sacramento, CA based tech death powerhouse ALTERBEAST have returned with their highly anticipated sophomore album Feast, which will see a February 23rd release date via Unique Leader Records. The nine track offering was engineered and mixed by Zach Ohren (Immolation, Fallujah, Carnifex) at Sharkbite Studios in Oakland, Ca and mastered by John Scrip at Massive Mastering.

Feast showcases ALTERBEAST’s most interesting material to date. With their distinctive mix of old school melodic shred and blistering, modern death metal the band has unleashed an album that will keep fans headbanging from start to finish. With a newfound confidence and songwriting prowess honed through years of touring, Feast is the sound of a band truly coming into their own.