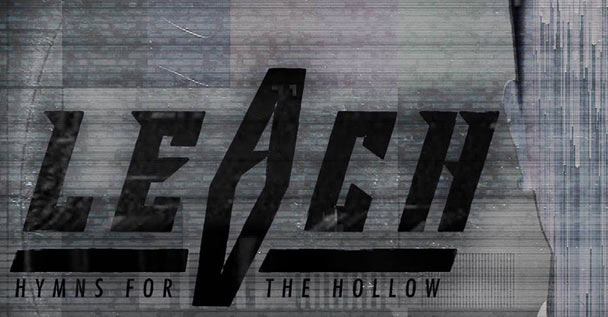 Today, we’ll be filtering through the latest music provided by a talented four-piece band known as LEACH. Operating out of Borås, Sweden, this musical unit has been running wild for quite some time now. In fact, they’ve been in operation since 2003. In that time, they’ve put out two full-length albums and an EP release, hitting hard at the ear drums of listeners the world over.

LEACH work hard to strike a balance between a number of differing musical approaches. Most notably, these are Thrash Metal, Hardcore, and Rock music. This makes for somewhat of a modern spin on the stylings of crossover music and maybe even what some venture to call thrash n’ roll at points. The sound is visceral and pumped full of energy just waiting to take out a wall close to you!

This is all put on display through their latest musical offering “Hymns for the Hollow”. Released in the first quarter of 2018, this record has proven to be a right hook to the face of unsuspecting listeners and a delight to the band’s following. They’ve pushed themselves and certain genres to make this happen and the results show in a number of ways. The LP is currently available for streaming and purchase on just about all major music platforms across the internet. This includes, but is not limited to Spotify, Bandcamp, iTunes, Google Play, and so on! You can also get a taste by hitting the “play” button on any of the video streams provided below. Just make sure to apply a mouth guard or some pads before doing so!

It’s immediately clear that this album is anything but hollow. If anything, it proves to be a bit of an emotional rollercoaster with some highly charged words and moods for the listener to move through. “Hymns for the Hollow” is very cathartic in some ways and very anxiety inducing and darkly brooding in others.

Thematically, this album leans heavily on concepts of existentialism and how nothing ultimately matters. This manifests in critiques of the world around us and our perception of time in comparison to the grand scheme of things. The lyrics of this record are comparable to watching grains of sand through an hour glass marked “death”. It’s not all doom and gloom though – there are moments of light painted on the dark in the form of motivation. In this regard, the other high point is that the album may very well make you feel something regardless of negative or positive connotation.

For the most part, the vocal delivery itself is very consistent. They come across through a standard Hardcore music yell. However, there are a few surprises to be found through the album’s duration on this front as certain growls are belted and a number of interesting supporting vocals come into play. For example, the very ending of “Pragmatic Youth” is particularly nasty. Another key point here is the emotion put in as a number of dark topics are crossed.

The instrumental corps of this band, quite similarly, brings a very consistent performance crossing all the elements that were mentioned back in the introduction ^. It’s clear that all these tracks belong together in a single album package and the band has clearly crafted their core sound. Also similar to the vocals, there are surprises to be found on this front through the duration of “Hymns for the Hollow”. For example, the title track has a calming effect and the album opener “The Untouchables” has some complimentary keys with the music.

The production of this album could’ve come across with some more clarity. It may have been an intentional decision to leave some dirt on this one given the generally caustic, hardcore nature of “Hymns for the Hollow”. That’s not to say it sounds bad at all – it just doesn’t always settle perfectly in the ears.

However, a number of the tracks themselves do settle quite well (while being anything by subtle) as the album keeps up a certain level of intensity. This only really seems to simmer down with the ending track and palette cleanser which is also the album’s namesake. There are plenty memorable numbers from the opening hits and keys of “The Untouchables” to the aforementioned title track. Stand outs include LEACH’s native Swedish tongue being belted over the riffs on “Framgångssagan”, “We Have It All” with arguably the catchiest chorus on the record, “New Low” with some very intense and memorable delivery, and “Do It” serves well as the record’s final heavy number before the album’s swan song. I also like what sounds like a Pink Floyd “Another Brick in the Wall” reference on “Pragmatic Youth”. In the end however, every track found on the trek of “Hymns for the Hollow” has something or other going for it.

There’s a certain rawness to this record, for better or worse. For the most part, the playing is tight and energetic but moments may seem loose. However, one thing is for certain… This album and the delivery on board are quite real. There’s no feeling of anything being overblown or quantized to hell and back. “Hymns for the Hollow” is simultaneously simple and effective which is always an admirable quality. There’s just this pummeling energy which is actually quite enjoyable and ultimately holds the spirit of this record together.

In crossing the finish line, this album proves to be a good experience. Despite testing how malleable some styles can be, it proves to be very consistent and fun through a high octane approach to metal / hardcore. I personally enjoyed it a good bit and I’m sure a number of other listeners would appreciate this effort as well. “Hymns for the Hollow” takes a solid 7 out of 10.

Once again, you can pick up this album or just give it a listen through a number of sources including Spotify, Bandcamp, iTunes, and Google Play. If you wish to give the band a direct follow on social networks, they’re currently active on Facebook and Instagram. Show some love!

In other related news, LEACH will be performing at Sweden’s very own Gamrocken Festival! This will be taking place very soon on the 25th – 26th of May and features a number of notable acts from across the metal world. You can learn much more about this by visiting the official Gamrocken Fest website http://www.gamrocken.se/