Fleshbore – an interview digging into “Malignancy” 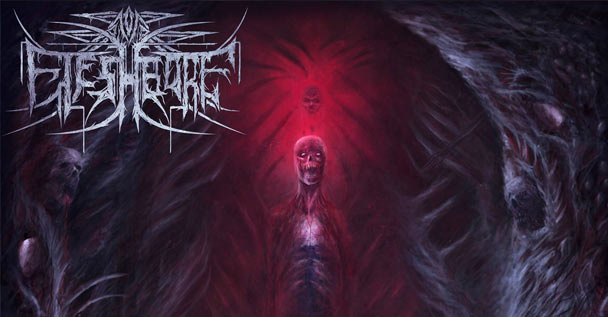 There’s a new Technical Death Metal force to keep tabs on! They go by the name of Fleshbore and they’ve produced a dangerous sound out of Indianapolis, Indiana. Their approach could easily be recommended to just about all fans of extreme metal.

This month, the five-piece band put out their debut effort “Malignancy” and it’s certainly worth a spin. You can find a full Bandcamp stream provided below. The record is currently available in both digital and physical formats over at that location as well. It’s a conceptual collection of music bringing several layers and ideas to the table.

With that being said, here’s our interview with Fleshbore:

You just launched your debut release by the name of “Malignancy” this month. So, first and foremost, congratulations on that. If you had to describe your band’s sound for first time listeners, what would you say?

I would say we’re kinda technical death metal with some blackened and atmospheric elements. We care about writing well structured songs that leave an impact, and we only use our technicality to leave that impact instead of show off.

If you could show the entire metal community a single track from the record, which would you choose?

We chose Curse to represent the EP before we initially released the whole thing. It contains all the different styles we experiment with in one song, and is in general just a well put together song.

Can you tell us a bit about the concept and the goals behind making “Malignancy”?

This album was written as an homage to a loved one that lost their battle with cancer and the fear the disease has instilled in us. We want this album to be a place where people put those negative memories and thoughts of cancer.

There’s clearly a lot of talent here. How did you bring it all together to start up Fleshbore as a band?

Before Fleshbore, the majority of the current members were in a group called Into The Divine, which consisted of a bunch of kids that started the band in middle/high school. That project fell apart a bit, and Fleshbore is a more dedicated and hopefully more successful version of ITD.

How did you come up with the name Fleshbore itself?

There’s no deep meaning to the name ‘Fleshbore’ itself. We just needed a name that fit the sound we were striving for, and people seemed to enjoy that one the most out of the ones we came up with.

You have some nice and grim artwork for the record and a really nice band logo to match. Can you tell us how you went about having those made?

We didn’t really have any sort of vision as to how we wanted the cover of Malignancy. We asked Cesar Adrian of Soul Asphyx Arts to work on the project, and he seemed really passionate about the ideas and themes of Malignancy.

You guys are from Indiana. Can you tell us how you feel about the modern metal scene coming out of the United States Midwest?

There is definately a lot of hidden talent out in the Midwest. Some of the greatest bands out in the area probably aren’t as well known, which is why it’s important to support your local music scene to keep amazing groups alive. A few of us have been traveling to the neighboring cities and states for a few shows, and there seems to be a lot of love and support for the smaller and more DIY extreme metal bands. We played a show in St. Louis over the weekend and received pretty well reception and a lot of support, something we don’t really see at home in Indianapolis too often.

Can you rattle off some of your favorite Death Metal bands or any outside influences?

We take a lot of influence from groups like Black Dahlia, Cattle Decapitation, Revocation, Beyond Creation, and the likes. Some of us are into other genres of music as well like classical, jazz, and funk, and we somewhat incorporate those influences in our music as well.

On a similar note, if you could be opening act for any single band (past or present), who would you choose?

It would be awesome to open for Beyond Creation or Obscura.

If you could step into a time machine and witness any event, what would you choose?

If Fleshbore had a mascot for the band, what would it be?

If we had a mascot, it would be a humanoid figure doing a T Pose.

Have any shows coming up?

All info regarding our shows could be find on our Facebook page, but we’re traveling to new cities and states we haven’t played at yet like Louisville, Kentucky (August 25th), and Lafayette, Indiana (August 18th), as well as opening the Indianapolis date of the Contamination Tour featuring Dying Fetus (September 21st).

Do you have any crazy stories from playing live shows?

Our very first show, there was this crazy guy (presumably drunk) who was just crowdkilling people, to the point where he got jumped by a few people in the crowd and eventually got dragged out of the venue.

That’s all we have for questions. Do you have any parting words to the people out there?

Keep supporting your favorite bands and give your friend’s band a shot!