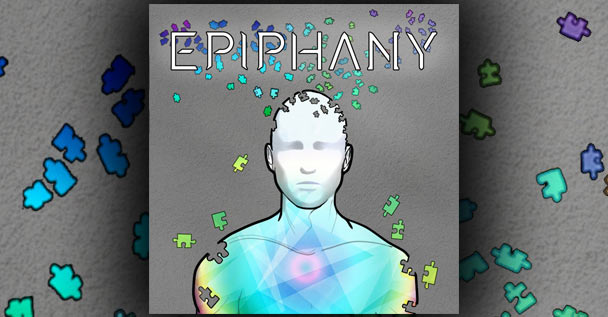 I would like to introduce your ears and mind to the glories of an Epiphany. This is a highly talented four-piece band bringing together a brand of Progressive Metal that really lets the music do the talking. Through this instrumental format, their goal is to bring listeners on a journey of sound, paved by the notes of their hard work.

This was all recently laid out with a new, self-titled EP. “Epiphany” was introduced to the world about a month back and consists of 5 tracks stretched across nearly a half hour’s run time. However, the music itself is anything but stretched thin. There’s plenty of content and replay value to be found through these 5 tracks. For those not keeping track of time, it may even feel close to a full album experience when all is said and done. That’s always an admirable quality.

If you’re looking to experience the music firsthand before digging too deep into this review, the self-titled EP is currently available for streaming on a couple platforms. You can find “Epiphany” over on Bandcamp, Spotify, and YouTube. Likewise, the record is available for purchase in multiple formats over on Bandcamp and iTunes. Enjoy!

Now, let’s dig further into this analysis and unravel some thoughts going into this Epiphany debut…

First and foremost, for being the band’s debut record, there’s a definite air of professionalism and quality to be found around just about every corner. High levels of musicianship and sensibility are clearly present here.

This is made apparent from the opening seconds of “Black Omen” and remains apparent throughout the entire experience. The Epiphany EP successfully weaves together a number of coherent musical ideas which are equal parts enjoyable and interesting. For being an instrumental Progressive Metal unit, they hardly stick to any one approach which is nice. They might not always be breaking into new territory but they don’t stay stagnant either. Moments such as a lacing melodic passage here or a flavor of Spanish guitar there are sure to pique interest throughout the listening process. That’s just barely scratching the surface because the music takes things so much further.

There’s a commendable element of storytelling via sound on a number of these tracks. It really feels like just about every number on “Epiphany” is trying to tell the listener something sans the words. Comparable to the intrigue of sign language, Epiphany pull off what many bands could only hope to do with lyrics on top. For example, a track like “Vertigo” feels like a true awakening and “Liar’s Lullaby” is a lovely side step that feels akin to unweaving a mystery or like a humble beginnings underdog story packed with emotion and intrigue. Most of this music has a cinematic quality to it. I could easily see Epiphany paired with a number of films and shows.

All 5 tracks have a special quality to them. That being the case, I’d also like to give a nod to the 2 I haven’t mentioned yet. “Epigraphy” has a certain menace to it not found on the rest of the EP. It also brings about a different flavor of guitar work from most of these tracks. It almost feels like a prequel to the aforementioned “Liar’s Lullaby”. “Acceptance” brings everything together as a noteworthy finisher. It starts off busy as a cyclone of tight melodic notes tying themselves together in a perfect storm and ends on some wide chords and piano lines.

On a personal level, I find this to be great music to get work done to as the focus from these musicians can easily translate positively in other ways. Usually, something like Death Metal would be my go to for that but Epiphany manages to pull it off in an entirely different way.

Also, while really not being similar bands at all, I kept feeling Pink Floyd vibes from parts of this record. This is likely due to Epiphany’s understanding of space and atmosphere within their music paired with the tasteful, advanced level songwriting I had alluded to earlier.

Now, all of this praise so far is not to say the Epiphany debut feels like a perfect offering. One of my qualms about this EP is that everything could sound just a tad sharper for the final product. Also, I believe the music would get an extra boost if real drums were included (along with some of the other instruments that show up digitally). Just these simple changes could make a huge difference on an already impressive sounding record.

There’s only one other thought I could possibly provide on that front. The band should try to find what truly makes them stand out from the pack (maybe their ability for sonic storytelling?) and fully capitalize on it. We live in a world with an incredible amount of instrumental Progressive Metal and Rock bands and most of them sound really great. Many of them just seem to fall into similar veins that Epiphany could definitely step out of in some form or fashion.

That’s not to say this record is unoriginal or unimpressive at all. Actually quite the opposite. I think there’s a great deal of potential that Epiphany could potentially explode into moving forward. It’s really up to them to decide how that potential will manifest itself. This is an incredible first step and it makes me wonder where the second and even the third footfalls could potentially land.

In the end, after assessing the thoughts going into this Epiphany debut, it manages to be a great sounding record! …Actually, a really great sounding record! This is for a whole myriad of reasons I’ve attempted to convey through the words above. It’s highly recommended that the prog heads of this world dive in and see how they feel about the flow of the Epiphany debut. Chances are they’ll enjoy it quite a bit. My gut is placing this one somewhere around an 8.5 out of 10. Very well done.

Keep in mind, you can add the Epiphany self-titled to your music collection through platforms like Bandcamp and iTunes. You can also stream via Spotify, YouTube, and the aforementioned Bandcamp. The streams are provided up above.

If you enjoy the music and want to follow along with what Epiphany does next, this band has a presence on social networks such as Facebook, Instagram, Twitter, and Bandsintown. Better yet, if you’d like to learn from the work they’ve put in, you can contact Epiphany for private lessons or guitar tabs by sending them an e-mail. You can also learn much more about the band and their story over on the Official Website!

The band consists of four members which all deserve an individual nod. They are Jeremy Hook and Seamus McDaniel (also of Retrosphere who we’ve worked with previously) on guitars, Ryan Johnson behind the drum kit, and Chris Abinette on bass. Altogether, they make a great sound worth exploring… So, once again, go explore and show this band some love!