What Awaits Us – Interview with Finland’s heavy hitters 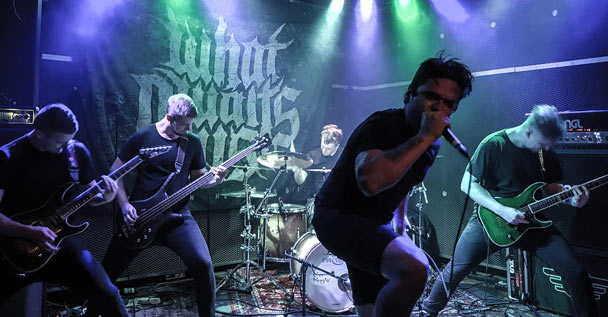 We recently had the opportunity to catch up with an exciting band making their prescence known from Finland. They are What Awaits Us and they’re here to bring heaviness. More specifically, they’re a cutting edge Melodic Metalcore band that simaltaneously keep themselves rooted in the more nostalgiac elements of the sub-genre. All in all, it makes for an enjoyable experience.

Most recently, the band launched a new EP called “Anomaly” which can be streamed through the players below. This includes an awesome music video for the track “Framework”. In support, we also have a review of the new record on the way here on TCP.

In the meantime, you can learn much more about the band and how they work through the interview provided right here:

We’re here with Finland’s very own What Awaits Us! How are you doing today?

We are doing great! A lot has happened in a small period of time, we had a great summer, batteries are full and we are ready to face the upcoming darkness of Finnish autumn and winter.

You recently launched an all new EP called “Anomaly”. It brings this awesome and sharp Melodic Metalcore sound I’m sure a lot of people would enjoy. How stoked are you on the new release and how has the response been?

We had a ton of work putting the whole EP together but it was definitely worth it – we love it and so far the feedback has been very positive. It seemed that the audience in the release party was also stoked.

How do you think you’ve grown as a band between your debut album “Awake” and the new “Anomaly”?

Our music grows with us and it’s a mixture of different views on music that we have in our band. That said, since we have had a few line-up changes on the road from Awake to Anomaly those releases are a bit different from each other but they still sound like us. We always write music that is just a little above our current skill level. That keeps us going forward. Pieces have been moving to their places and Anomaly was a concrete thing to weld this line up into a strong team.

Is there a concept behind the new EP? It comes strapped with some nice artwork and you seem to have this purple-ish neuron theme going between that and the recent “Framework” music video.

Yeah we wanted to keep the look uniform between these two. The new EP is lyrically about neuroscience and biology. We wanted to take a bit of a deeper look at what really drives us as humans and where we are heading to.

What was your favourite part of making the “Framework” music video?

We made the video by ourselves from the beginning to the end. The whole process was a great experience and we learned a lot. Also we were able to try ideas that came to our heads while we were filming. As a result of all that we got this awesome video that fully represents the artistic vision of the EP – so all in all the favourite thing about the video was and still is that it is purely “us”.

If you had an unlimited budget to make the music video of your dreams, which track would it be for and what would the video be like?

If that money dropped to our hands now we could for example make a second music video from God Complex. Massive budget would open doors to a huge production team and value with deep storyline, realistic 3D stuff and epic set to play with. Maybe we could throw a well known actor there as well.

How did What Awaits Us come to be? What’s the story behind the formation of your band?

Our guitarists Olli and Miika were roommates and they have had some music projects together but in 2010 they decided to get more serious. A thrash metal band ArrorA was formed with Jesse as a singer. As the band gained experience performing, and the music evolved, it eventually came to a point where ArrorA saga had to end in order to start What Awaits Us with a new musical direction. Shortly after the first album AWAKE Eetu and Ville joined the band. Creating ANOMALY really brought the current line-up together and built a strong foundation for the numerous upcoming releases.

Is there a story behind the band name itself – What Awaits Us?

The future is always somewhat of a mystery. Everything can change in a blink of an eye. Think about how the world has changed during our lifetime. We embrace the mystery that is the future, and the possibilities it offers.

How do you feel about the current state of metal music coming out of Finland? Any bands you would recommend?

As you may know, Finland has extremely high number of metal bands per capita. So the scene is strong and very versatile. There are major metal bands that are known globally but more unknown ones that are great. To mention one, you should check out I Revolt! We had a blast playing with them on ANOMALY Release Party a week ago, a great bunch of guys that play with an attitude!

If you could play a show with any band in the world this weekend, who would you choose?

It would be awesome to play with (and to get to know to) a band that has influenced us a lot, such as Architects, Veil of Maya, Breakdown of Sanity or August Burns Red.

You’ve toured around Europe. Do you have any good stories to tell from the road?

The Baltic tour itself was a great and eventful journey! For example our bassist Ville has celiac disease and as we found out, it is not greatly known in Eastern Europe. He had to eat ONLY potatoes (mostly french fries) for the whole tour. On the first day we were informed that one of the clubs was about to collapse so we were moved to another venue at the last minute. Everything went well and the location ended up being amazing! If you stay positive, positive things are bound to happen.

Do you guys have any pre-show rituals?

Nothing big really, we mainly warm up with our instruments and tell each other to have fun. Because that’s what it is all about to us – having fun!

If you could step in a time machine and witness any event, past or future, what would you go see?

We don’t really get to see too many cool bands over here in the cold north, for some reason a lot of bands seem to skip our country when on tour. We would probably go to the States and see a brutal ass tour somewhere. Guess the time machine would be more of a cheap method of transportation.

What music have you been listening to lately?

Everyone of us is always looking for new bands and music to listen to. Recently other genres outside of metal like rap, retro synth wave, classical, and psychedelic rock.

Those are all the questions we have. Do you have any final words for the listeners out there?

Thank you for your support! We hope to be able to come and play our stuff live for you!