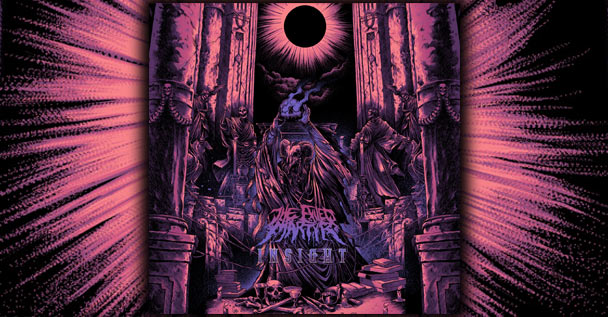 The mists had risen from a stagnant swamp that once bred life. That spark of consciousness took on a new, entirely more wicked form seeking the arcane knowledge with which to transcend death itself. One final step lined the case as the creature rose the scrying skull’s boiling eyes towards what would be the land’s final eclipsed sky. A tear of blood fell while undead cherubs took flight. Completing it’s lifelong mission which left a line drawn beyond death itself, a shuddering breath left the beast’s withered lungs. It finally saw “Insight”.

Terrible prose aside, “Insight” is the title of the new EP from The Exiled Martyr which follows up their exciting introduction with the 2016 album “Stagnant Waters Breed Life” and the self-titled EP earlier that same year. It’s more than clear this band hasn’t rested on their laurels in the past 2 years and, despite some changes both sonically and within the line-up, they’ve managed to come out on top of a very solid new record.

If you wish to give a listen, there are plenty of ways to gain “Insight” yourself! The band’s music is available for streaming and purchase on platforms like Bandcamp, Amazon, Spotify, Apple Music, and Deezer among others. We also had the opportunity to launch a full video stream which can be enjoyed right here:

Sharpening their teeth, the band seems to have naturally evolved from the direction they had previously been heading in. They’ve driven that sound to a fine point that could easily be compared and contrasted with heavy hitters from the field. In fact, The Exiled Martyr reminds me of combination between bands along the lines of The Black Dahlia Murder and Within The Ruins. They encapsulate a well-constructed Melodic Death Metal sound in a number of ways but also work to merge it with a more modern, technical style. They also bring some kick to call their own. All in all, it leads to an exciting listening experience that I’m positive a number of you reading will greatly enjoy.

The musicians behind this band are really something to behold from track to track. They don’t pull any punches as the attention to detail from second to second is somewhere near jaw dropping while traveling through this EP. There’s a clear grasp for metal songwriting and a thirst for intensity that’s shared throughout The Exiled Martyr’s line-up.

Speaking of which, The Exiled Martyr is composed of five members all worthy of their place. Alex Prince and Dajean Bell provide lead and rhythm guitar duties respectively but it’s beyond clear they’re both able to kick the shit out of their instruments. Newcomer Michael Fiorino diligently delivers the rumble with his bass. Aaron Hale has an excellent sense of rhythm, holding the band down behind the drum kit. And, finally, newcomer Anthony Esposito brings an absolutely bestial performance with vocals up top. Altogether, this band functions as a well-oiled machine intent on bringing the kind of heaviness that will crush ears and leave listeners impressed.

The “Insight” EP itself is composed of four tracks which all feel very complete within themselves. Beyond that feeling of direct completion on each number, they feel even more complete within the greater whole of this record. All the pieces fit together correctly. Everything is coldly calculated. This shows that The Exiled Martyr are well aware of how to craft an experience out of a release within their lane. This showed on “Stagnant Waters Breed Life” as well and the band clearly hasn’t lost focus. This is surgical.

The four tracks go by the titles “Catatonic Misery”, “Celestial Unrest”, “Glass Kingdom”, and “Iniquitous Bidding”. I wouldn’t rush in to say any are better than the others because they all bring something vital to this release while simultaneously staying firmly linked to one another. There’s no feeling of filler as every track shows the band’s best sides in one way or another. So, instead of name dropping specific tracks, I’ll just dive into some of my favorite elements found across “Insight”…

Between the music and the lyrics I’ve caught onto, there seems to be a storytelling element to this EP. While I wouldn’t say this is an atmospheric record in any way, it does seem to transmit a feeling of foreboding, grandiose scale, and almost something close to evil with these tracks. It makes for a cool effect which most certainly wreaks of metal.

Below the surface level, this EP stands on the scaffolding of some very nice compositional elements. The whole experience is lined between some truly breathtaking melodic passages which leave the listener open for some very heavy and impactful moments. At first glimpse, it may seem to be a guitar driven endeavor but, truthfully, the other musicians are up to the task of keeping up and complimenting even in the guitar’s biggest lead moments. Even the vocals can be quite technically proficient at times. The band will also incorporate synthetic instruments along the lines of strings and choirs to bring certain moments to a whole new level.

However, back to the guitar work, there are some truly blazing guitar solos put forth on this record. Just about every track boasts a stand out axe moment (or two) along these lines. They often make for some of my favorite moments on the EP.

The production on this record is crystal clear on just about every level. There’s no opacity or mud to cover any member of the band as they blossom in metallic glory together like a steel rose painted with blood. The cold calculations and fiery riffs are given extra life through the work Sam Hughes did at Premier Studios in conjunction with the band.

It also bears saying that this is a book you can judge by it’s cover. Andri Maulana did a magnificent job with the cover art lending excellent first impressions to “Insight”. This artist seems to be a mainstay for the band, having also adorned their previous record “Stagnant Waters Breed Life” with beautiful visuals. Everything really seems to come together with The Exiled Martyr for one reason or another and this is no exception.

From a personal standpoint, I have to say this is great music for being productive. In the process of writing this review, it often came to the forefront of my workout playlist for good reason. There’s a certain force behind every number to push the listener forward from day to day activities. This proved to be true for my workflow in general which I usually utilize some form of extreme metal for. Turns out The Exiled Martyr fit the bill in a number of ways.

In terms of criticism, I wouldn’t call this the most original EP of the year. However, it’s pretty damn great for what it is. I also firmly believe if The Exiled Martyr figure out how to truly etch out their own sound within the parameters they exist in, they can become one of the best in their given musical movement. They just need to get to that point where the average metal head joe can listen and say, “Yeah, this is definitely The Exiled Martyr.” However, in reality, I don’t have anything that’s truly bad to say about this record. These dudes knocked it out of the park in so many ways and they should be proud of that fact.

When the final Day of Judgment comes, “Insight” stands like a rock in the storm. I wouldn’t say it’s pure perfection but it certainly has attained greatness among its peers and easily stands among the greatest releases in it’s section for 2018. In the end, I’m feeling somewhere around an 8.5 and a 9 out of 10 on this release.

Once again, you can enjoy the music for yourself through the streams provided up above. All of the band’s music is available for listening and purchase on Bandcamp, Amazon, Spotify, Apple Music, and Deezer.

If you’d like to dig in further and see what makes The Exiled Martyr tick or just see what they have up their collective sleeves next, they’re also active on some social networks. You can give ’em a follow over on Facebook, Instagram, Twitter, and YouTube just to name a few.

Now, go forth and enjoy this music, ya bastards! 🤘