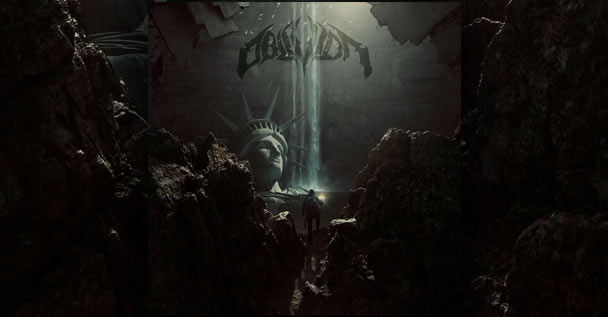 If the seventh trumpet could be translated into pure Death Metal form, it might sound something like the dissonant delights of Oblivion. This is an elite group of musicians making extreme music worthy of the end itself.

The band started in 2007 as a duo between the brilliant, critically acclaimed composer Nick Vasallo and Death Metal underground legend Ted O’Neill who came back to music following a 20+ year hiatus. They were later joined by no less than the founder and primary songwriter of All Shall Perish, Ben Orum, and the highly talented drummer Luis Martinez who’s worked with more bands than I can count.

Altogether, they would go onto launch a demo in 2012 that was followed up by the cold, dark beginnings of 2013 with their debut album “Called To Rise” (CLICK HERE to read our review). With this, they immediately marked themselves as a force to be reckoned with, standing out from the majority of the Death Metal pack with their talents and aptitude for forward thinking. This was taken up a few notches more with the sophomore album “The Path Towards…”, launch in 2017 (once again, you can CLICK HERE to read our review).

As such, Oblivion have been on our radar since our very origins as a metal loving website. They’re one of our Death Metal mainstays and every return of their sound sets us on edge… For good reason! They’re among the leading wave for the sub-genre today in terms of compositional experimentation, swan dives into dissonance, and for just plain pummeling the listener’s brains out. It all makes for a good time to say the least!

So, naturally, upon hearing that the sequel to “The Path Towards…” what announced, we asked, “The path towards what?” In speaking with Ben and Ted, we discovered the band had actually written 2 full albums in 2 months on their last go around, furiously composing the weavings of metallic greatness!

To reiterate, Ted commented on this fact by saying, “We got into this frenetic writing pace… Nick is a monster as a composer. One of those that can write a song in his head and then sit down and notate the whole thing.”

All the way back then, interest in a new project was piqued to say the very least. This was further fueled by the release of 4 fresh singles that left remnants of faces on the floor. You can give all of these a go across this very page. Prime your clickers and press those play buttons for a bloody good time! “True Awakening”, “Forgotten Brotherhood”, “Threshold” and most recently “Witnessing a Glorious Dawn” made for a deadly introduction. In fact, the most recent single was made as a tribute to the late Bill Tolley of the band Internal Bleeding. Unfortunately, he passed away last year after taking brave actions in the line of duty as a firefighter in New York City (the city itself has also honored him since).

Now, the promised follow up album is about to rear it’s terrifying visage. It has actually been crowned as the self-titled effort amongst the band’s already quite impressive discography. It’s set to officially make landfall on January 21st, 2019 as an independent release. The music will be made available on just about all major music platforms. However, in the meantime, the Oblivion self-titled effort can be pre-ordered, both digitally and physically by CLICKING HERE.

Now, the question remains… As an album experience, is this worthy of the self-titled mantle among Oblivion’s already impressive discography? Let’s find out!

There’s a consistent intensity to this record that’s matched with sharp attention to detail. With the exception of interlude moments, every number put forth on this track list has a devastating, yet well calculated effect that’s dipped in sweet dissonance to wilt the ears from your head. Even when it’s not full on heavy, there’s an ever present sense of menace to be found around every corner of this record. The instrumentation across the Oblivion self-titled is solid as to be expected. There’s no shortage of talent or brains to be found amongst the line-up. Seeing them all work towards a single, deadly purpose once again is truly a treat to behold. This is organized chaos at its finest.

From my perspective, the album plays out in two sections. The first half is more aggressive in some ways, going right for the throat between its composition and lessened atmosphere. For example, “Insurrection” and “Forgotten Brotherhood” absolutely flatten ears off the bat and easily have some of my favorite riffs on the whole record. The band’s more experimental, dissonant, signature, Vasallo-esque sound seems to bleed back in most on later half. It fully emerges with the “Aliens Among Us” interlude and permeates numbers like “Expand The Hive” and “Negative Mass”.

The full album experience almost seems to build up to this signature effect, deepening with every track after the initial smack of “True Awakening”. Given the band’s history, I was actually kind of surprised by the first part of the record. It’s immediately present on the band’s prior output, almost lending itself as a cornerstone.

I’m just spit balling here but, considering “The Path Towards…” and the self-titled effort were written back-to-back, an immediate sense of differentiation may have been present in the creative process as not to make the same record twice. I personally enjoyed the deepening of this signature effect through the duration of the band’s self-titled album here. It gave the album experience an interesting flow from front to back, almost like an extreme gradient effect which effectively adds replay value. Ultimately, every track on this self-titled effort fits together well in their given order. It’s clear they all belong as a singular experience.

Once again, there’s some interesting vocal experimentation at moments to expand upon the driving death growls. For example, there’s a moment on “Fear What Is Unknown” where the vocals distort upward like some fearsome carrion bird. The higher vocals across the record can also have an interesting, hectic emphasis to them at times.

Also, from a personal standpoint, this has been one of my favorite albums for getting work done in recent history. It provides that beloved Death Metal overload and push to inspire productivity. It also serves as great gym music. That being said, I’ve been delighted to have it in regular rotation over the past few weeks since the band has blessed me with an early listen \m/

In terms of production, the record is given the *umph* it deserves on just about every front. It’s not overly glossed, rather done just right to emphasize the grit that every track strives to bridge into the listener’s ear. Well done.

As for criticisms, I don’t really have anything bad to say of the overall push behind the self-titled album. At worst, I was initially taken aback a bit while listening to the album’s first half but that was primarily due to expectations. Once again, I enjoyed the whole experience very much. I don’t expect it will be everyone’s cup of tea (what is?) but I can easily see Oblivion slapping a stupid smile on the face of just about any extreme metal fan inhabiting this mortal realm… So long as they’re not opposed to oppressive amounts of dissonance.

All that being said, we’ve reached our journeys end and the time has come to reflect on the massive sounds that just passed through our ears… How does the new Oblivion album fare as the bands own self-titled jewel? If the whole of this review doesn’t serve as any indication, I’m not sure what would… It’s a great album worthy of its place! Great may actually be an understatement seeing as my gut feeling about this record lands it at a superb 9 out of 10. Oblivion knocked it out.

Once again, the album will be made available through just about all major online music platforms when it officially releases on January 21st, 2019. However, in the meantime, you can pre-order the beast both digitally and physically by CLICKING HERE.

This is not a band known to sit on their laurels so it’s best to try and keep up. You may do so by giving them a well-earned follow on platforms such as Facebook, Twitter, and YouTube.