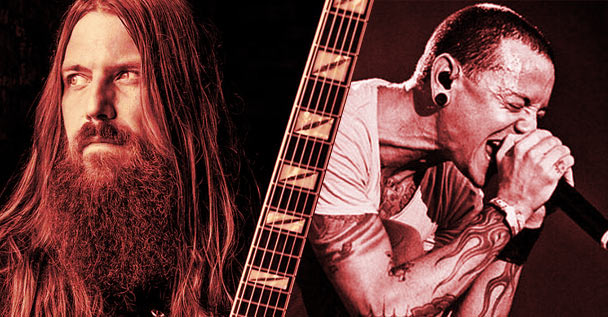 1/8/19 UPDATE – The single featuring Chester Bennington has been released! You can give a listen right here:

Lamb Of God guitarist Mark Morton is gearing up to launch a solo album by the name of “Anesthetic” which you can learn much more about by CLICKING HERE.

It’s an album that’s filled to the brim with quality guest vocalists. One of the more surprising additions was the late Linkin Park singer Chester Bennington who, unfortunately, passed away last year.

While speaking with Metal Hammer in recent history, Mark spoke on this collaboration and how it came about:

“I had my people call his people! It was one of those things where we were listening to the song like, ‘Who in our world would we have singing this?’ And Chester was the name that came out.

So we almost didn’t try, because it’s Chester Bennington, he’s such a superstar. We were kind of like, ‘Come on, we can’t get him.’ But if we hadn’t tried, we wouldn’t have got him, so we tried, we got his ear, I was surprised to find I was on his radar and all, but through Lamb I was.

He heard the song and he was in. It is a really good song. I’m sorry, I don’t know if I’m allowed to say that, but it’s a good goddamn song, right?

We had to iron out a couple of things legally and all that kind of stuff, but on the creative side, he was in from the jump. And I didn’t realize how in he really was, but when he showed up I did, and that was humbling for me.

He just had a lot of creative input at the ready when he came into the studio. That was my initial like, ‘Wow’. He had told me he really liked the song, and we had communicated, but I’d never really hung out with Chester until when we started tracking.

I was really impressed for a guy at his level, at the place in the career he was at, someone of his stature and celebrity, to have that level of humility and commitment to come in there and treat this like it would be a Linkin Park song, or his own song or whatever.

I was pretty blown away by that. And it was immediate. Fifteen minutes after we met, we were standing over a table, one on either side, each with scraps of paper and pencil, crossing off words and trying different rhyme schemes and stuff.

And then after the track was laid out, then we took a breath and started talking about more personal stuff – real-life shit. And yeah… he surprised me the most.”

Once again, to learn more, you can head over to Metal Hammer.