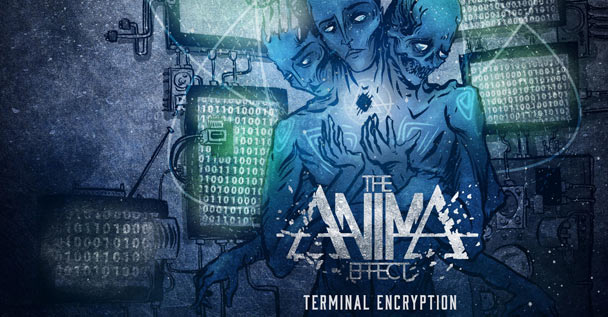 The Anima Effect is a Progressive Metal band known for their exceptional songwriting and unique lyricism. I found their debut album Upheaval randomly on the internet which I very much enjoyed. I kept in touch with their lead guitarist and I literally asked “When is the next EP coming out” every time we had a chat. I was stoked to see what the band would come up with on their sophomore record. Now that the album is finished and waiting for its release on February 22nd – I now get the gist as to why it took them this much time to finish recording the EP.

Before I jump into the music, it is important to clear up the confusion amassing the concept of this album. The narrative follows a character’s internal struggle with the world around him and what to do about it. He seeks enlightenment and, in the end, uses his knowledge to destroy the human race rather than free them of their mental slavery. So where did he come up with this concept? Well, here is what Trevor, their lead guitarist said.

“In this dystopia people are controlled through nanochips that censor the ability to learn while also restricting their access to historical knowledge and consequently the ability to think independently. Everything and everyone are interconnected through a master database containing all human history which our character hacks to access all this info and also gain access to our missile systems and launch a nuclear warhead to wipe out the planet and start over. Our character goes insane and thinks that extinction will bring rebirth and free us from our digital noose”

If that story makes you want to stand up and applaud, then just wait till you listen to the music! If you have listened to their previous work, like me, then it would be easier for you to analyze their sound. The Anima Effect is known for incorporating Progressive elements onto their Deathcore/Metalcore roots. Their sound is as sophisticated as any other Progressive band but with less nerdy stuff. So, expect the non-boring, short and an aggressive version of your typical Progressive Metal band.

The Album starts with Manufactured Existence which opens up with a synth section that sounds similar to something that you would hear on a Sci-Fi movie when some stuff is about to go wrong. Then straightaway the vocals kick in. The screams are on point and not to mention the beautiful work made by the drummer to keep everything in place and on pace. Although, I like all their instrumentation-it is the guitars and synth arrangements that separate The Anima Effect from other bands. Their electronic elements are compelling and yet not repetitive. You won’t be having long repetitive synth sections but only just long enough to make the transitions easier and effective.

The second track, Decoding the Matrix picks the tempo back up where the last song was left out. It starts with a synth intro as well but this time around its less dramatic but more disco-ish (I don’t know, I just enjoy it!). Then again, the vocals kick in. Like discussed before, it is their way of writing music that separates them from the vast majority of Progressive Metalcore bands. They are not breakdown-centric but they do use occasional breakdowns which are not laid out on the entire track. There is a tiny guitar solo on the song which makes me want to listen to that part over and over again. Overall, it is a nice follow up to their first song.

What’s a concept album without a *insert song name* Part I and *insert the same song name* Part II, right?! Terminal Encryption Part I&II are the essence of this album. If Manufactured Existence was a killer track then I would suggest you listen to these tracks. The Part I starts with a killer riff which best fits the heavier stuff going on in the background. The vocals are beautifully laid throughout these tracks and the guitar work is solid. Like I said before, the synth is an unsung hero throughout the album or on all their songs in general. I expect them to experiment with those much more in the future because it fits their sound so perfectly. The Part II of the track also features Charles Caswell who is known for his impeccable work on “Berried Alive”. On this particular track though, Charles does the vocals. Also, a little heads up for y’all, there is a killer breakdown on Part I&II towards the end of each one of them.

Just in case the cleans on Decoding the Matrix were not enough to fire up a debate, The Anima Effect made sure to include a ballad. That too featuring Katie Thompson. She did a great job as far as I’m concerned. A beautiful track that serves as the “Calm before Storm” aspect of the album. The song is catchy and I can’t get the lines “The Choice is yours to make” out of my head. Beautiful track which tests the skills of the guitarists on playing a much more melodic and slower tempo. It surely is one among my top tracks on this album.

The album and the concept end with a seven-minute track, Unveiling the Paradox. Which kinda reminds me of After the Burial, Born of Osiris and Veil of Maya. It is no surprise that I’m getting BOO vibes since the guitarist, Trevor Roberts has told me on several occasions he is inspired by them (On a side note: He loves the new BOO, which is a good thing). There are a lot of beautiful parts in this album but my favorite moments are indeed the solos.

In short, Terminal Encryption is a trip to a Science Fictional world without the aid of visual perception. Their remarkable way of portraying their concept through music is adept and I don’t think they could have done it any better than this. A solid album that shows the band’s maturity and their evolution from their debut album which was, in fact, less technical. I really hope they would come with a new concept such as this. To sum it all up, the album is “surreal”. Nothing much to complain about.