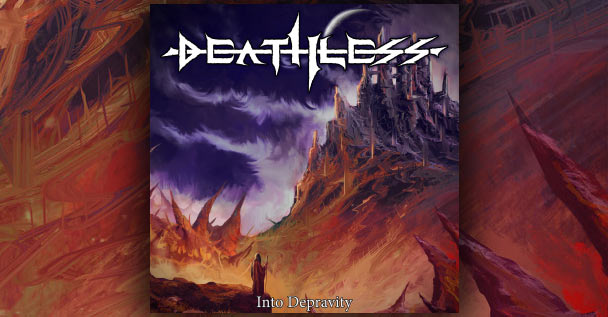 The winds have shifted to a ceaseless howl. Through them, a new force of sound is rising to cover the lands with an eternal darkness. They are Deathless.

This is a three man band on the rise from the reaches of Winchester, Virginia. Having just formed in 2018, Deathless are already incredibly advanced. They’ve been brewing their take on Melodic Death Metal in that seemingly short time and already stand poised to strike at the hearts of metalheads the world over!

In fact, the band is currently planning the release of a full-length album to hit the world sometime in late Spring! That’s not a bad wait at all! More information has yet to be uncovered but it would appear that they recorded at Studio 63 with Matt Hoffmaster to make the record happen. They also procured some awesome cover art from the one and only Mark Erskine who’s done a lot of good through the metal underground.

However, the first true evidence of this juggernaut-to-be just arrived this week! The single “Into Depravity” has made an impact. It makes for 3+ minutes of metallic fury which I could easily see a number of you getting into. From top to bottom, there’s a lot to enjoy here as the band approaches the attack from many angles. That being said, feel free to give a listen through the streams provided on this page!

You can also add “Into Depravity” to your collection by heading over to Bandcamp! Furthermore, the band has some merch options available to those who CLICK HERE.

To keep up with Deathless as they journey to the release of their debut full-length, you can give the band a follow through resources such as Facebook and Instagram. Brace yourselves…