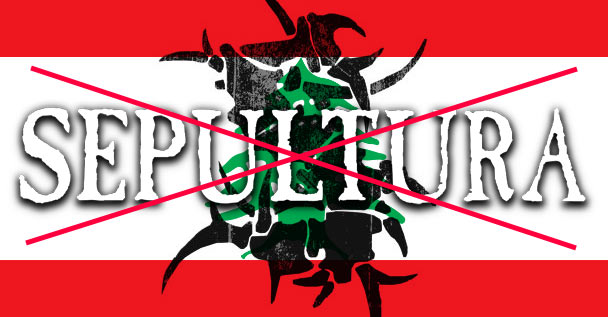 In a ridiculous bit of news, it would appear that Sepultura have been banned from playing an upcoming show in Lebanon for their “devil worship”. I don’t know about you guys, but I never thought of Sepultura and devil worship being synonymous…

Skull Session, the promoters for the show, left the following statement in regards to what happened:

“The media office of the organizers of Sepultura Live in Beirut concert released the following statement:

We were going to host a concert for the International Brazilian Metal Band Sepultura on the 28th of April at The Palace – Aresco Center, Beirut. After duly applying for artist entry visas for the band, we were informed that band members had been banned from entering Lebanon. The concert organizers were not even allowed to view the decision.

However, after enquiring before the artists’ division, we were told that the issue is delicate as it relates to insulting Christianity, that the band members are devil worshipers, that they held a concert in Israel, that they filmed a video clip supporting Israel, and that the decision was issued by the head of the General Security Forces.

We would like to clarify that these accusations are totally untrue. The band did not play in Israel. The aforementioned video clip mentions Israel’s racism without naming it. The same video clip, which was launched in 1993, contains scenes of Israeli repression, and members of the band are shown drinking tea with Arab clans. (1)

As for insulting religion, current members of Sepultura fight against all forms of corruption, and call on the world to return to goodness and nature and to reject corruption. Since it’s the nature of metal music, the band uses a violent style of expression. But they did not directly attack Christianity. in fact, the band’s vocalist has shared on his personal Instagram account photos of St. George’s Cathedral in Lviv – Ukraine a few days ago. It should be noted that the icon of Saint Charbel appears in the photo. (2)

We would like to point out that the band is socially active as it tries to shed light on corruption in societies without adopting any ideology or being inclined towards any thought. On the contrary, through their lyrics, they ask people to return to God and to reject an abnormal automated society, not to worship Satan as interpreted by some.

Finally, we would like to point out that it is a shame to see such censorship in Lebanon, a country that claims to be the only democracy in the Arab world, where freedom of thought and belief is safeguarded impartially, while countries that are more religiously stringent, such as Turkey and the United Arab Emirates, host this band that was banned from entering Lebanon(Dubai is hosting them for the second time).

Sepultura has held a concert in Dubai in 2017, and will be having a second concert at the Hard Rock Café in Dubai on May 2, and a concert in Turkey on April 30th.

While Kisser and bassist Paulo Xisto Pinto Jr. trudge through mud, Max Cavalera screams about racist politicians and the plague-like effects of hate and discrimination. Although the song’s video deals with Israeli violence against the Lebanese and Palestinians, “Territory” pertains to every situation in which a government uses xenophobia to justify cruelty.”

The media office of the organizers of Sepultura Live in Beirut concert released the following statement: We were going…