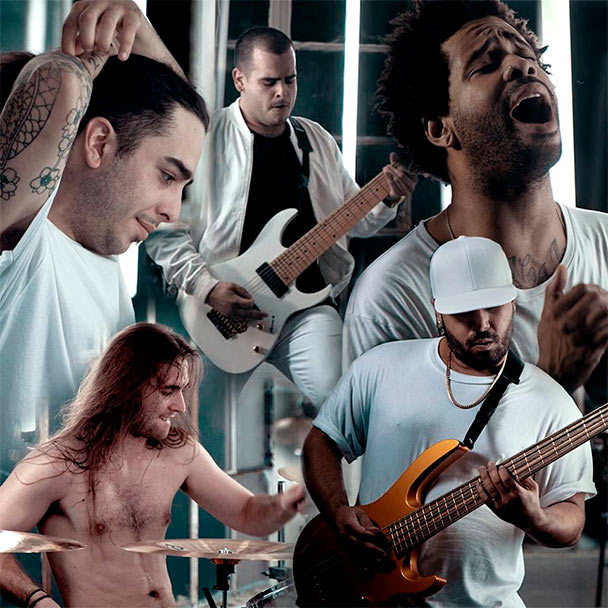 It had been rumored that the new Volumes vocalist would be Myke Terry (ex-Bury Your Dead). And, as it turns out, rumors are sometimes true. Myke has officially joined the band following Mike Barr’s departure. This should be an interesting new chapter for the band. Following this, the band also answered a bunch of questions in regards to this decision and their new direction:

#‎VTEAM‬– Volumes have received a bunch of comments/questions with our recent announcements, so being that we are stand-up guys, we are going to address a few of them for you. Take it for what it is..

1. the previous albums are not on iTunes, Spotify or anywhere right now. This is due to some a “behind the scenes” business situation that we aren’t going to bore you with. Soon enough they will be back available. Once they are we will be sure to let you all know. Thank you for your patience.

2. We did hold auditions for the new vocalist position. We listened to all 400+ of them that were submitted (again and again). There were some great auditions and some not so great. We had some people personally fly out/travel out to audition in person for multiple tryouts. It was a tough decision with a lot of talented people. Myke Terry auditioned just like everyone else. It just so happens that we felt he was the best one OVERALL for several different reasons, regardless of the fact that he was in a known band before. We are extremely excited to have him be a part of Volumes. He is already a true friend and brother to us.

3. We did not go out to find a replacement to sound exactly like Mike Barr. Mike was a huge part of Volumes and just doesn’t make sense to try to find someone to mimic him. He left to pursue his own path and we respect that and hope only great things for him.

With that being said, we took this situation and made it into an opportunity to write a NEW chapter in Volumes history.
We are excited that we were able to go into this new album with a fresh perspective with different ideas to explore. As musicians it just doesn’t make sense to continue to completely copy the sounds of previous releases, for the fans OR for us. That shit gets boring and stale and if that’s what you are hoping for..sorry. This new album will undoubtedly be VOLUMES, but ultimately it’s your choice to like it or not. If not–don’t worry..there are tons of other bands you can go listen to–however, WE happen to love it and we feel you will as well.

PS— there is no plan for any new Voltures..sorry, it was a fun idea, but we are ALL onto other things at this point