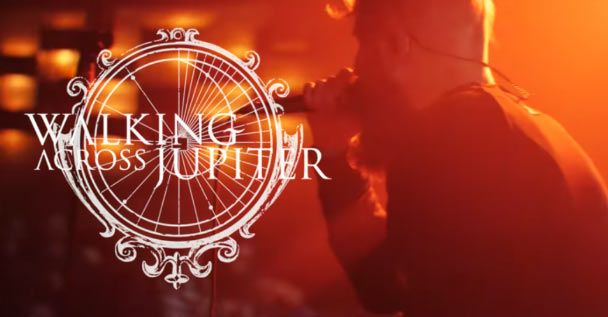 Walking Across Jupiter are giving audiences the double tap this week. Yesterday saw the release of their all new single “Eschatology”. Today, they’ve released a music video to support the release of the new track! Take in the sights for yourselves right here:

The Yatskov Max directed video compliments the song by showing the band hard at work in the studio. It’s a nice look into the very professional production that Walking Across Jupiter bring with each release. Towards the end, it also shows clips from the band performing live to emphasize the aggression and cathartic nature they’re capable of bringing about in their music.

If you missed it on the first go around, the new track brings together several of the band’s key elements under a beautiful light. It’s primarily driven by Walking Across Jupiter’s melodic side but also brings about a subtle side to the orchestral components which the band is known for. This beauty is also broken by an awesome heavy section towards the songs tail end.

If you wish to dig into the band’s work through other mediums, the new single (and much more) is available through platforms such as Spotify and Bandcamp which you can, likewise, check out through the links just below.

As we speculated yesterday, these singles could be leading up to the release of a new album or EP sometime soon or Walking Across Jupiter could be treating fans to the rollout of a single series given the unique artwork and loving treatment of each release. Only time will tell… Either way, should be great for ears across the globe!

If you want to keep up and see what moves Walking Across Jupiter make next, you may do so by giving the band a follow on their social networks like Facebook and Instagram. They remain quite active on both platforms. Give them a follow while you’re at it! Any and all support here is well deserved.

Just to up the ante once again, you can also find more of Walking Across Jupiter’s music through the video streams provided just below. This includes the band’s previous single “Scarification​/​Induration” and their previous full-length effort “Oneiroid”. Enjoy!