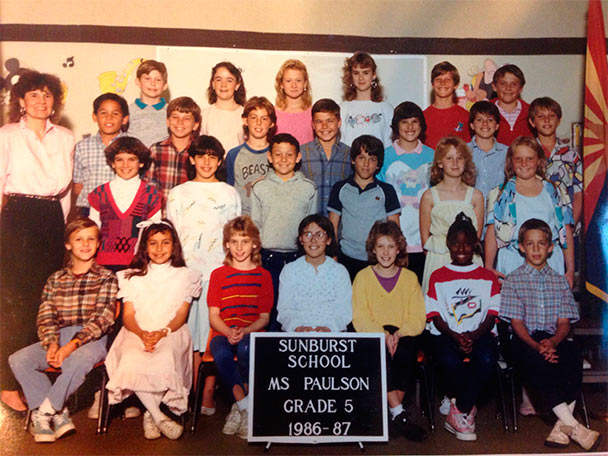 “Chester and me in 5th grade. I’m pretty much center in the grey button up and he’s a row down to my right in the grey hoodie.”

At this point, the tragedy of Linkin Park singer Chester Bennington’s untimely passing has been widely publicized. Over on Reddit, a confirmed childhood friend of Chester Bennington posted up a 5th grade picture of the two and shared a number of childhood stories in relation to himself and the late Linkin Park frontman. You can read them here:

“I don’t really know what to do since I found out about his death. We weren’t close as adults though we did reconnect a few times over the years.

But, as kids, for a few years we were best friends.

Though we didn’t talk about it with each other at the time, we were both going through horrible abuse as I learned later.

I looked to Chester as a beacon of light and hope for me that one of us made it out of that. One of us had our dreams come true. I was so very proud of him, always.

I hope to formulate my thoughts and memories about Chester into something coherent at a later date. Right now, it just hurts. Very bad.

For the moment, I wanted to share this with people that might care in a similar way for him that I did. The kid you see in that picture wanted to be a rock star even then. That kid is the one that got hurt and the one that left us so suddenly. I will miss him terribly.”

I’ve been going over my time with him in my head since hearing of his death. It’s a bit foggy as I’m the same age as him and that was a long time ago. I think the one memory that keeps coming back the most was when he would sleep over at my house. We used to have this ugly, burnt orange sectional type sofa that you could move the pieces around and create a big square with.

Once the parents had went to bed, we would make that big, soft square and bounce around on it and share stories, watch movies and just be kids. We’d sleep there when we couldn’t stay awake any longer as much as we tried.

Chester made me laugh. That is what stands out the most to me. I laughed harder with him than anyone I remember. I made him laugh too. I like to think we gave each other a rest from the horrible things that happened outside of that sofa.

It meant a lot to me. I’m not the kind of person that has had a lot of ‘best’ friends. People I really connected with on a deep level but, Chester was one of them. I’m pretty sure, due to the amazing life he lived, he was more important to me than I was to him.

However, that never stopped him from giving me the biggest hug and being so genuinely excited to see me in our twenties when I showed up at a concert in Germany.

This was when they were opening for Deftones and before they hit the rock star stratosphere. That was the last time I saw him face to face and I wish it could have been longer.

We were Chet and Chester for awhile once again and it was wonderful even if it was just in a stinky backstage area.

He recognized me right away. What happened was Rob (drummer) was at the barrier after the show signing and I approached him because he is friends with my cousin. Chester and the others were still toweling off, getting some water etc.

As I was talking to Rob to ask if I could see Chester, Chester came out and saw me and was like, ‘Holy shit! Chet!’ and it went from there.

It was pretty cool because this was in Germany, I was in the army at the time, so I’m sure he really didn’t expect to see me there. I had hoped to surprise him and it all worked out so that was great.

To be honest, I was surprised by his reaction and thought I may need to remind him. But no, he knew immediately and surprised me with the huge hug and insistence that I come backstage and catch up.

Honestly, I didn’t want to be a bother and just thought I would say hello and tell him how happy I was for him and be on my way. The entire band were very nice and welcoming. Dudes from Taproot were there too and all very cool. We were both probably 24 years old or so at the time and they were touring on the ‘Hybrid Theory’ album.

At that point, he was still the Chester I knew for the most part. He was married with kids already though so that was a change for sure. This was early on when they were still opening for other people. I was not in touch with him directly after that when they got huge.

Funny thing is, I ended up working at the same place as his Mom around the time ‘Meteora’ came out. I had a job in a hospital cleaning post surgery stuff. A very gross job but you get to play music loud while cleaning up the goop.

Anyways, I was playing ‘Meteora’ loudly in there and this lady pops her head in and says, ‘That’s my son’s band!’ I was like, ‘Who is your son?’ I about fell out when she said it was Chester and she about did too when I told her my name because she remembered me.

Very cool moment and a very gracious woman. She had told me Chester loved to read on the road so I bought him a couple of my favorite books and wrote him a letter that she delivered to him for me.

That is the last sort of attempt at contact I made. I always held this little hope that if we both made it to 60 and his fame finally faded a bit, we might get back together on a big, soft square and talk about the wild ride.”

“I would like to share another little story about Chester that isn’t as flattering initially. I don’t know, I just feel like getting it out and thank you to anyone that gives it a read.

As I’m sure most of you know, Chester struggled with drugs and I saw him in the middle of some of his most difficult times. We must have both been about 18-19 years old. It was at, of all places, an indoor soccer arena in the Phoenix area.

I had finished the match I was playing and was walking around the upper level where the spectators were and heard someone call my name. I turned around to my right and there was Chester, standing up from the white, wooden bench.

I was immediately taken aback by his appearance. At this point I had not seen him for about 5 years. He was gaunt and pale and his eyes did not invoke a sense of trust in me. He was skeletal. If you look at any of those old Grey Daze videos from around 1995, you’ll see what I mean.

He greeted me warmly and I returned that sentiment but, he freaked me out. I don’t know if you’ve ever spent time around a meth head but, my experiences with them have always been uneasy at best.

There is something missing in the way they look at you and Chester had that about him. We spoke for a few minutes and he wanted to see about getting together sometime, told me about his band and such. I declined and wished him well. I didn’t know what to do, I was 18, and I just didn’t know how to handle what I was seeing. I felt guilty about that for years.

When I met up with him in Germany, I apologized for that. Chester forgave me immediately and said he would have done the same thing had he been me. He knew he was a mess then. He knew he was lost at that time and he owned it.

I always respected him for that and was very thankful for his understanding of not only my actions, but his own. I don’t think he ever denied that he had demons working inside of him and that, sometimes, they won. I can relate. I bet most of us can.

I’m telling this story because, having had that experience with him, seeing him like that, made seeing him on stage in a stadium filled for him and his band so much more rewarding.

I’ve said a few times how proud I was of him (hard to say was), and that’s a big part of it. A huge part of it. He fought for what he was able to do every day. I know he wasn’t always perfect. I know he said some things people didn’t like, particularly recently. I know people are upset that he left his family behind. They have every right to all of those things. They bother me too.

I want you to know that to get as far as he did, he had to fight as hard as anyone has to fight with themselves. I respect that about him and I always will. Even though he lost that fight eventually, it was a fight that produced some of the most important songs and art of my lifetime.

I feel lucky to have lived a life in parallel with Chester. That I got to be on this journey with him over the years. Even from afar, the view was amazing and it pains me to know that, going forward, I’ll only get to see that same sweeping landscape of creation from the rear view.”