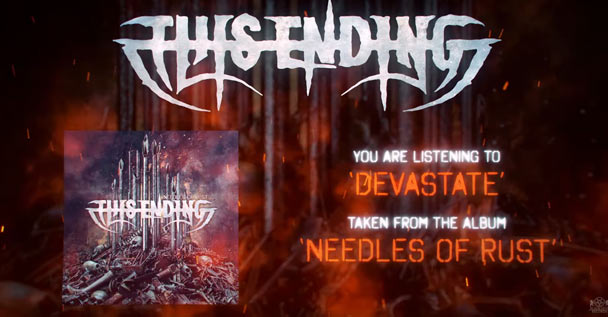 May 28th 2021 sees THIS ENDING returning with a true melodic death metal masterpiece called “Needles of Rust”. Nine songs of Apocalyptic, Brutal yet Catchy melodic death metal back to the roots of what was done earlier in A CANOROUS QUINTET.
“Needles of rust” was recorded, mixed and mastered at Wing Studios by Sverker Widgren, To give the album cover the necessary atmosphere Björn Gooßes of Killustrations was hired once again (as on the previous album “Garden of Death”) to take care of the artwork and layout.

Overall the lyrical themes for the Needles of rust album deal with different kind of nightmare scenarios. Some lyrics are loosely based on real events and things that has happened over the world. Some are just about nightmares as an overall phenomenon. All lyrics are up for personal interpretation, I just try to give a glimpse of what went through my head when I wrote them.

This Ending comments – This is also a song written a few years back that has finally after several arrangement changes found it’s proper shape. Really straight forward and a real head banger of a song. We also have guest vocals on this one by Paul “Themgoroth” Nordgrim, Dark Funerals first vocalist. A song about what might happen when you’re put through extreme events in your life and are constantly abused or used in some way.