THIS OR THE APOCALYPSE “DEAD YEARS” ALBUM PREVIEW

Pennsylvania metalcore powerhouse This Or The Apocalypse literally just put up a press release and a teaser hyping their newest album. “Dead Years” is to be released September 25th. The follow up to 2010’s blistering “Haunt What’s Left” could end up being the band’s most aggressive release to date. It will be interesting to see how the departure of drummer Grant McFarland will affect the band. However, I must say the replacement Aaron Ovecka is a tank behind the kit.

Frontman Ricky Armellino states, “‘Dead Years’ is full of some of the most painfully honest material we’ve ever written. The album features both some of the saddest, most melodic songs we’ve ever played and it also holds some of the angriest. It’s about war and family, how we’re really never unaffected by the world around us, no matter how hard we try to get away from it. We’re very proud to finally get the opportunity to release it.”

This Or The Apocalypse has always been a step above the majority of the metalcore genre with original ideas, powerful conviction, and next level talent. This release is definitely one to keep your eyes on. The tracklist, artwork, and teaser are below. 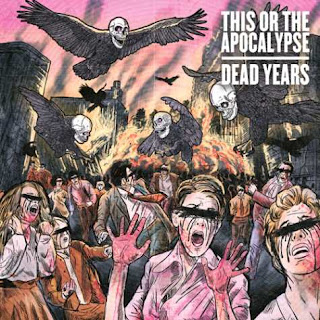 See More: Metalcore, This Or The Apocalypse
« THE SAFETY FIRE RELEASE NEW MUSIC VIDEO
AFTER THE BURIAL AND BORN OF OSIRIS UPDATES »