THE SCHOENBERG AUTOMATON – ARTIST OF THE WEEK CONTEST / INTERVIEW!

This week we present absolute insanity. The Schoenberg Automaton are an Australian Death Metal band on the absolute fringes of heaviness and technicality. With ferocious talent and forward thinking, they completely deserve the title for Artist of the Week.

You know what that means! We have an awesome contest running with the band which is live just below. And under that we have an in-depth interview with The Schoenberg Automaton’s guitarist Shayne Johnson. Take a look and win some free goods! 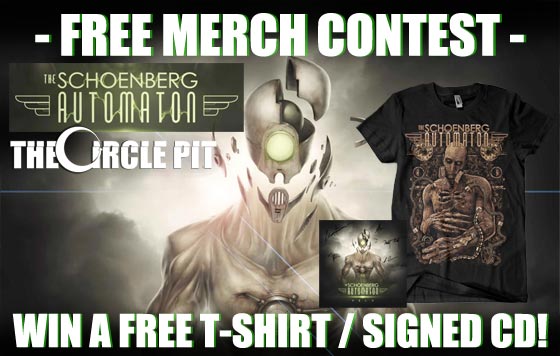 *By participating, you acknowledge that you completely
release Facebook of all responsibility. This promotion is in no way sponsored,
endorsed, administered by, or associated with Facebook.

MT – We’re glad to have The Schoenberg Automaton on board as our Artist of the Week! How’s it going dudes?

SJ – We’re going pretty damn well; however, I am at work right now, pumping through the pig of week known to the populace as “Monday”.

MT – Indeed it does. You guys are damn heavy. I mean that in a metal, not a fat kinda way. You also throw in all kinds of crazy technicality and twists through your music. How do you go about writing this insanity?

No, but seriously I think it was never really the intention to be overtly heavy for the sake of it. Nelson and I started writing tunes that we just wanted to sound crazy, and ever since then it has almost taken on its own sonic path. I guess when you have a group of 5 non-genrephobes, things just sort of blossom into something different.

MT – Meth is one helluva drug. Who or what inspires your music?

SJ – Metal-wise, we often get comparisons to bands like Decapitated, Ion Dissonance, TDEP etc, but I think it’s the vibe and lack of barriers that inspires us and spurs us to think outside the box.

Anyone can tune down to Drop-Q and binary their way to teh heaviez, and same with anyone can do sweeps and impressive technical feats to sound “tech”, but it’s way more interesting to sit there and create what you would like to listen to.

MT – How did the band get started up?

SJ – It originally started with a crappy demo song that I made and passed on to Nelson, who was playing in a rock band at the time. After which, we sat and wrote Pineapple Juice and the Tough Stuffed Olive together. He literally wrote the drums, and then I wrote around that.

To be honest, I think we both originally just wanted it to be a sweet project for us to be proud of, but it became too exciting to keep it like that. We decided to make it a real band and go from there. Each new member brought something synergistic and it has just evolved since then.

MT – Is there a story behind your band’s name?

SJ – Hahaha, there is, actually! Nelson and I were brainstorming some pretty fruitless ideas about the name of the project for quite a while. From some reason or another, I had a dream that Arnold Schoenberg (the 20th century composer who still remains one of my favourites) came back as an Art Deco/Clockwork robot. It seemed to stick and work for the sound concept we were going for.

Also, it’s hilarious collecting photos of all the misspellings from promoters… the best so far has got to be Schoenburg Tomato.

MT – Hahah wow, sound delicious You recently dropped your debut full-length “Vela”. What all went into creating that monster?

SJ – A lot of stress, time and delays… not to mention it also included the search for a new vocalist.

We originally recorded the drums at Studio 454 with Dan Fields. Dan was great, because he had the same vision as the rest of us did in regards to the actual production. Absolutely anyone can jump behind an electric kit or their DAW of choice and go bananas, but we spent a lot of time trying to capture the natural kit.

The bass was recorded by Zimi, guitars were recorded mostly by myself and vocals were handled by Adam Merker at Studio Anders Debeerz. Adam has been a close friend of ours for a long time and handled the mixing duties before handing it over to Joel Adams for mastering.

Every person involved were just as passionate about creating something away from the typical overly-quantised metal as we were (sometimes when faced with more delays, more so, hahaha).

MT – How has the response been?

SJ – Overwhelmingly positive. It’s seriously humbling to hear some of the great comments back from YouTube, or the people that take the time to message the band’s page with how much they’ve enjoyed listening to it. Most people are happy with hearing something different and we’re stoked to be having that response!

MT – That’s good to hear! How do you guys come up with song titles? You have some great ones like “Pineapple Juice & The Tough Stuffed Olive”, “Ultimatewhirringendmachine”, and “The Woodhouse Sakati Syndrome”.

SJ – Hahaha! Another good question; to be honest, most of the songs on Vela have some form of backstory behind the inception of their name. Except for Pineapples… it was essentially a random placeholder for the first song we ever properly created.

We’ve never really been a fan of overly grim or generic metal titles.

MT – We’ve noticed there’s an insanely good metal community building in Australia. What bands would you recommend from down under?

Thy Art is Murder and Northlane are absolutely killing it right now, so major props to them.

Unfortunately, since most of us have full-time jobs, TSA isn’t our career. We’d love it to be, but for now we have been spacing out our shows as much as we can afford. We have some shows lined up with Psycroptic and King Parrot in August, as well as a bunch of other plans in the works that have yet to be announced. The Facebook page would be the best port of call to see what we have up our wizard sleeves.

MT – How often / how much does The Schoenberg Automaton play live?

SJ – We’ve been playing quite a bit this year in wake of the album launch across most of the east coast of Australia, playing our first headline show interstate last month. Since we work, we try and pick and choose the most beneficial shows and avoid playing in the same area too often.

MT – Makes sense. What is the craziest thing that has ever happened to you at a show?

SJ – There’s a couple of winners – we were fortunate enough to win Triple J’s Unearthed competition this year, which enabled us to share the main stage with Linkin Park and Slayer. It was an incredible experience, and one of the greatest moments in our lives.

There was also that othertime that we dressed up as pirates (apart from Damo, who wore a mullet wig and shiny leggings) and played a festival in the carpark of a pub.

MT – Ouch. At least you got through it. Here’s comes the fun round… Where are we, in a cube?

SJ – Well, it depends on what you perceive as a cube? Why would you ask me if you already assume it’s a cube?

Don’t tell me what to do. You’re not my real dad.

MT – Oh man, I hope I’m not your dad haha. Those are all the questions we have. Thanks for your time! Are there any shout outs you wanna give before we wrap up?

TSA – Thanks heaps for this, it’s been pretty damn excellent. Huge shout outs to everyone that has shared the new video, or the tunes or just generally enjoyed our shenanigans in any way. You guys rock