Progressive Thrash/Experimental Metallers from India, Undying Inc, have earned the title of Artist of the Week on The Circle Pit! This is a dangerous musical unit literally oozing out talent, metal, and potential. Read up on the interview and be sure to enjoy the heavy music below \m/ 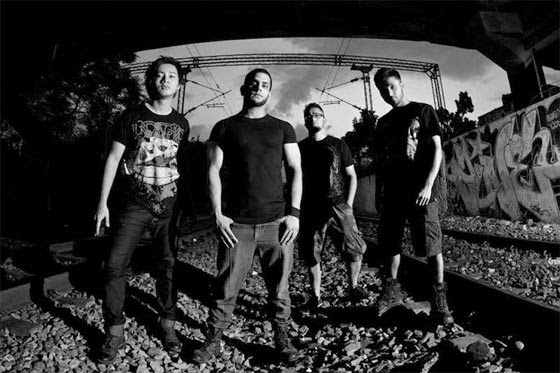 AD – Greetings from your new fans at The Circle Pit. How’s everything in camp UI?

UI – Hails and thanks for having us on The Circle Pit, we are honoured. We are good and busy, there is a lot going on at the moment, things are in constant evolution and mutation. You know the drill.

AD – How would you describe Undying Inc. for the uninitiated, rather your fans across the border who have just tuned into your music?

UI – Probably as simply as, the heaviest band you had never heard of, until now.

UI – Yes, our plan is to try and release it at NH7 Weekender this December, where we play with our buddies in Textures and Demonic Resurrection. IRONCLAD E.P will be an online platform release where fans can access and download it easily. There will be no physical copies of the EP at the moment.

AD – Give us a little background story to the themes you have explored on “I R O N C L A D”. What made you zero in on this title, what does it represent and in what ways does it vary from your last effort “Aggressive World Dynasty”?

UI – It represents the current state of mind we are in, ready to take on the world. The need to have an iron will and the strength of purpose needed to survive the pit-falls of our nation and society in today’s scenario, is the major theme. IRONCLAD is definitely a step forward from AWD in every sense, be it song writing, musicianship or production. It’s also a prelude to the shape of things to come in the next album.

AD – Undying Inc. was on a hiatus of sorts with only half the previous line-up surviving till your vocalist Shashank re-joined your ranks. What made you seek separate ways and what had been the primary ingredient behind the reunion? Would you say that this is the strongest the Undying Inc line-up could have gotten keeping in mind the musical dexterity “I R O N C L A D” demands?

UI – It’s just one of those unfortunate things that get in the way of every band you know, since there are different personalities, egos and opinions involved. What was important for us was to move past that and let go of all the old baggage and move forward stronger. One good thing that’s come from this hiatus whatsoever is that we’ve reprioritized things. The band has been touring, playing gigs relentlessly for the past few years and it was finally good in a way to take the time out and just write new songs, hone new ideas. Yes, correctly put, this pretty much is the strongest line-up we have had until now and it shows in the new material.

AD – Walk us through the procedure you followed for composing “I R O N C L A D”. Were the vocal parts laid down after Shashank re-joined the band, or otherwise? What gear have you used for the EP?

UI – We have a very organic way of composing; it’s always through rehearsals with the entire band jamming together on song ideas. These ideas evolve from the initial riff or groove pattern or time signature structure into full songs as we keep building and layering, or adding to and subtracting from it, until it sounds just ‘right’ to our ears. Yes, vocal parts were laid down after Shashank re-joined, though lyrics and a basic template were already in place for him to work with.

AD – “Aggressive World Dynasty” was mastered by Anupam Roy at Grey and Saurian studios, and “I R O N C L A D” is being handled by none other than Keshav Dhar from Skyharbor at Illusion Audio. What was the primary reason behind this shift? Keeping in mind the pros and cons of both producers, in hindsight would you consider re-mastering “Aggressive World Dynasty” with Keshav at the helm?

UI – Well, we have been asked that quite a lot since the release of the IRONCLAD single. “Aggressive World Dynasty” actually had both Anupam Roy and Keshav Dhar on it, as producer and engineer respectively, a fact we are quite proud of that it combined two of India’s best studio talents. There is no primary reason for the shift as such, it’s just that we wanted to push the template of our sound forward from the last album, have new dynamics added and work with someone who understood us. Keshav was both available and comfortable with that. We have not considered a re-master yet, but who knows, maybe in the future if we ever decide to re-release the album, it could become a possibility.

AD – “Aggressive World Dynasty” portrayed a Sci-Fi rendition of post-apocalyptic Earth where the machines are commanding the whip. How does “I R O N C L A D” deviate from this? Is there any relation between the concepts on either record?

UI – The new material is a lot more ‘organic’ in nature, for lack of a better word, some of it will still represents our obsession with war machines, but a lot of it also looks inwards at who we are today. At the more gruesome ‘human’ aspects like, hatred, anger, lethargy, oppression, torture, enslavement, strength and fighting the odds. Sci-Fi unfortunately has become such a ‘trendy’ thing now, every hipster band out there is suddenly inspired by the universe, so we are going back to the primitive. The roots of metal are dark and gritty you know.

UI – Well, that is a co-incidence that some pointed out and something we really hadn’t noticed until then as we hadn’t really seen Game Of Thrones. But unlike the soap opera, where everything is a lot more drama-archaic, this is a very modern representation of a ‘bullet-robot’, though gruesome, brutal and all-destroying, but yet man-made out of a platoon’s arsenal of machine guns, bullets, tanks and war weapons. Thank you, it was designed by our bassist Reuben, he does all our artwork as well as designs for a few other bands. You can check out more of his design and art at http://www.behance.net/visualamnesia

UI – We are currently on a tour in support of the release and will continue that for the next few coming months, adding more and more shows as and when they happen. We are also currently working on releasing two videos, an official video for IRONCLAD and a lyric video, which you surely should definitely watch out for. New material is also being written for our next album which is aimed at a mid-2014 release.

AD – Undying Inc. has travelled to Europe on two occasions including a stint at the revered John Dee at Inferno Metal Festival 2012 in Oslo. Is this the most memorable of your shows? If not then do share some of your war-stories with us.

UI – Both those stints were extremely memorable for us, Inferno for being such a huge experience. But especially playing Roros (northern Norway) with our brothers in post-hardcore act Torch. It’s a UNESCO world heritage site, a beautiful little town. Refreshingly new experience. It was sub-zero temperatures, yet the energy of the kids was so amazing, for a non alcoholic under 18 venue, they were getting high just on black coffee and metal. Also the drive back to Trondheim at 2am, stopping to let these big Reindeer cross and freezing piss breaks / pit stops on the highway, unloading back line with frozen fingers, great memories. You can watch some of it here https://www.youtube.com/watch?v=Ti0CMhLBYOc

AD – We hear that Undying Inc has a strong stand against being pigeonholed or being lumped into specific genres and sub-genres and that you stick to the label of being a Heavy Metal band. What is your prime reason behind this? What is your stance against all the genre-biasing and other such objectionable opinions that the community feels they are entitled to?

UI – Yes, we are very clear from the onset that we are quite simply a ‘Metal’ band and our only purpose is to create crushing heavy music. All these sub-genre labels are quite pointless, good music is defined by its purpose and the kick you get out of it, not what label it falls under. Genre pigeon holing is the work of hacks who need to define a band within a bracket to justify their critique. The regular metal head will love a band for their music, no one has ever said “Dude, I love Pantera because they are post-thrash-hardcore-jizz-groove-metal”, you could just say “I Love Pantera” and that explains it.

AD – Give us a little update on the Indian Metal militia. What is the state of the present scenario? Is it progressing at a favourable rate or are there glaring nuances plaguing it?

UI – Though it looks like Metal is on an upsurge in India, it’s only a placebo, there are more bands, fans and critics due to social media; as opposed to real necessary facilities like having enough live venues, proper band management, metal specific professional gigs or equal opportunities. We do not see it becoming a very profitable thing for bands, most organizers still do not want to pay a ‘metal’ band what they deserve, most fans do not want to pay to buy tickets to see an Indian metal band, most of the audience wants discounted or free merch. Nothing will change really. Metal will be always be the underground, always has been, always will be, that’s what it was truly built for.

AD – At The Circle Pit we are always on the lookout for new music. What Metal or otherwise artists are you listening to at the moment? Are there any specific artists/music that you would like to share with us?

AD – This is your space. Your international fans await your destructive stage presence and your recent ritual of spraying everyone with bottled water. Is there anything else you would like to convey to them?

UI – For the bands; Keep your day job, keep band affairs in-house, keep it DIY, don’t depend on corporations and labels, take every opportunity as it comes but don’t drown in debt to follow your dreams. Gig long and prosper!

For fans and metal heads; keep the spirit alive, defend the faith , support your metal and the hard working bands however you can, they need it. Fight the good fight! We hope to come play for you and see you all as soon as we get the opportunity.