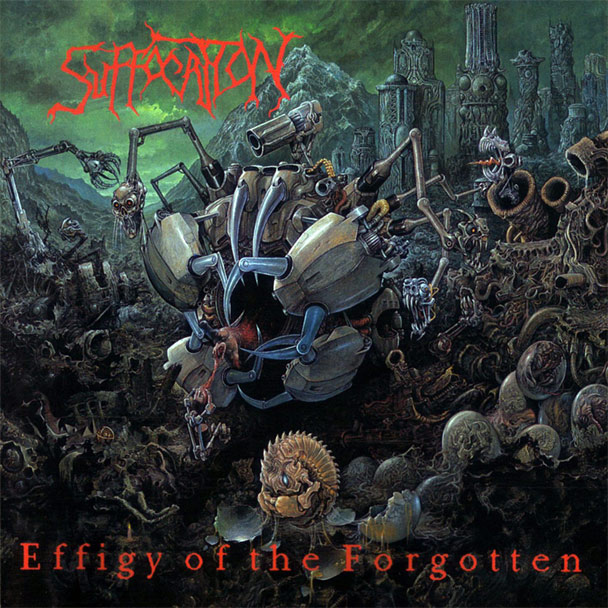 It’s crazy to think about how death metal has existed for close to 30 years at this point.  What basically started out as thrash metal’s heavier side has evolved into one of the most diverse sub-genres in metal.  Of course this wouldn’t have been possible without the existence of bands willing to innovate or experiment.  As for Suffocation, they practically re-wrote the whole manual.

With their debut in 1991, Suffocation made it clear that death metal could be more technical and more brutal.  Mike Smith and Terrance Hobbs really brought the tech aspect to the forefront of this band’s sound. While Smith dominated in precision, complex rhythms and intricate fills, Hobbs provided a wall of tight tremolo riffs with the occasional chaotic sweep-style solo.  As a vocalist, Frank Mullen brought forth some of the deepest growls to be recorded at the time.  Having these three musicians together on an album was one of the greatest things to happen to American death metal.

A truly noteworthy feature of this band comes from their consistent use of slam riffs.  Listen to any song of theirs and you can expect to hear smooth transitions from blast-beat sections to slam riff breakdowns.  In the short run this made them stand out as a unique band within the scene. In the long run it established a basic blueprint for modern bands such as Dying Fetus and Whitechapel to expand upon in the following decade.  Most importantly, Suffocation proved that slower can in fact be heavier.