There's a new modern metal event emerging from the southern Europe. It's looking to bring a new area some of the vibes of Euroblast and Tech-Fest. We're talking about Dissonance Festival. It'll take place in the Italian city of Milan on June 22nd. The Circle Pit will be acting as a direct press sponsor. So to all of our European friends – you know what to do!

Supporting these three great headliners, the festival will feature a sick line up made up of the best Italian artists from the genre. First of all, Basick Record's Damned Spring Fragrantia – Italy's pride. But there will also be Lies Of Nazca, who's debut album “Aleph” (2014, Rogue Records America) was streamed exclusively by this website. Despite Exile, another one of our finest tech-metal artists. Forgotten Tears, one of the biggest metalcore acts of the nation and Berith's Legion, whose music video for “I Am Empire At The End Of Decadence” was streamed by The Circle Pit as well. More local acts announced are: Burn After Me, The Big Jazz Duo and Got No Ego.

Presale tickets are available now on bigcartel at the very special price of 12 euros, while the door entry will be just 15 euros!

There has also been a small warm up tour that featured Modern Day Babylon and Promethee on selected dates with sick guests. The response of the audience has been great so far… June 22nd should be something entirely explosive! Time to awake the nation with one of the biggest events it has seen in years! See you there! 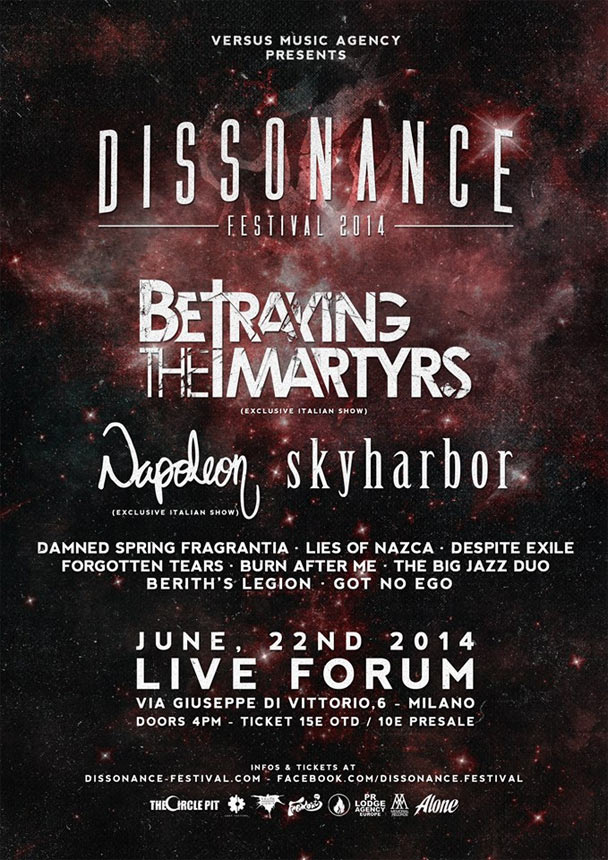