Fallujah have been walking the cutting edge of metal music. They've proven to be among the most creative and forward thinking of musicians through their hard work. This is exactly why their new album "The Flesh Prevails" is one of the most highly anticipated releases this year. You can almost feel the metal community buzzing around this one.

The reason stands clear. Over time their sound has transformed, almost pulling a 180 in the direction of pure greatness. This is especially true of their last two releases. First off, 2011's "The Harvest Wombs" saw a major transformation in the band's sound – reeling in the direction atmosphere driven Death Metal with supreme heaviness to boot. It was a landmark debut for the band, regarded by many as a modern classic. 2013's "Nomadic", however, is the game changer. If "The Harvest Wombs" was driven by atmosphere and creativity, "Nomadic" was absolutely submerged in it. With only 3 tracks running 18 minutes, it managed to shake the metal community (This is especially incredible considering one track was pure atmophere – the kinda stuff movie producers would kill for). Ever since, ears have been anxiously waiting for more.

"The Flesh Prevails" is the direct response to that great anticipation.

First things first, for an in-depth look at the new Fallujah album, "The Flesh Prevails", our very own John Whitmore conducted an interview with the band's very own Alex Hofmann. You can read over that right HERE.

Furthermore, their sophomore album details have been officially announced! "The Flesh Prevails" will be released July 22nd through Unique Leader Records! Pre-orders aplenty are available HERE. The official album art has been released and it's damn beautiful to say the very least. Set phasers to stun and take a look below.

But most importantly, Fallujah has released the first song from the upcoming album! "Sapphire" is a thoroughly enjoyable musical experience. It's highly recommended that you give the track several listens, allowing your mind to melt into it's complexities. It gets richer with every listen. UPDATE: Fallujah have released a second single entitled "Carved From Stone"! It's every bit as mesmerizing as the first, but within it's own stride. Listen below!.

To believe a full album of that quality is heading our way is staggering and inspiring to say the least.

You won't want to miss out on "The Flesh Prevails" \m/

LISTEN TO "CARVED FROM STONE" HERE 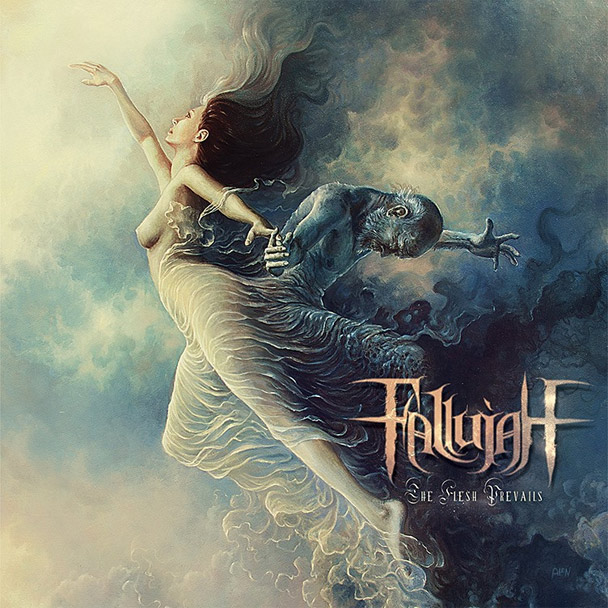