I want to give a shout to all the metalheads in the world. We all have ups and downs in life but we stick together through thick and thin. I say this regardless of the elitist mind state that has tarnished parts of our community. Whether you're into death metal, thrash metal, metalcore, power metal, black metal, or post-bearded speed metal, the fact stands. We are one. When you throw the horns up anywhere, whether at a show or the many corners of this world, it means something. Something much bigger than your own self. This is a culture. This is a churning world of artists, ideas, emotions and sounds beyond imagination. This is inspiration. This is life itself to some of us.

Personally, as a metalhead, I love the nature of this music and what it brings to my life. Without it, I'd be lost. The point is, without all the awesome metal music in this world, I wouldn't be able to express what's going on today.  I'm sure some of you can relate.

I'm going to tell you the story of a friend I grew up with. To be honest, he's more of a brother to me. Though for the sake of this exercise, he will go unnamed. Obviously, a select few of you reading will know exactly who I'm talking about. But permission was granted to share a glimpse of his life and the write up has been reviewed, so here we are.

There is a time and place in this world for both the good and the horrid. There is a place for the world of music alongside cold, hard reality. Music was always his motivation. He was deprived of childhood. His parents divorced early in life and he had to start thinking for himself before most of his peers. This is where metal ties in. He began listening to 80's metal in particular, devouring everything from Thrash to Glam. It began to give him hope and thoughts about what the world could be. He also began to recognize how everything affects everyone differently. He drew power from music that seemed to draw fear from everyone else.

At the time, he was also an upcoming athlete and a rabid sports fan. The music pushed him perform both on and off the field of sports. The mixture of the two was an endless realm he could not pass up.

Later in life, after several unfortunate events, he began a war with depression and anxiety. All the boy really wanted was a happy and satisfying lifestyle for himself. But that light refused to cast on him as the pursuit continued. He was bullied in school, tortured inside and reluctant to find out the charade was just beginning to unwind itself. After finishing up his 8th grade year of school, he felt like life was only a barricade that he could not escape. Until one day, he discovered a whole other side to metal music he never knew existed. Stepping into the underground and it's surrounding territories, he saw limitless potential and light in so many wonderful forms. This guided the boy further from his sorrows and showed him a healthy way to escape everything.

But as time passed, he hit another serious rut in the war with his depression, anxiety and countless other entities he never would of dreamed about. Dreams turned to nightmares in the blink of an eye. As previously mentioned, he had an intense passion for sports. He excelled to the point that different colleges and even minor league professional teams were scouting him out. This all ended suddenly with a serious, career ending injury. Recovery was hard.

He kept on pushing through everything – the bullying, relational issues, hatred and other emotions. Regardless, his will was to overcome. And no matter how bad things got, he did exactly that.

Years passed and another fall back began. He lost both of his grandparents back to back. Shortly after, his brother had lost his best friend at an extremely young age due to bullying and negative life experience. This really made him start to think. And the thoughts were dark. He would usually pile up and crush everything inside him. But he couldn't in this case. And that was only the beginning. Several more events took place that I cannot disclose in this write up. The only thing left was music.

Countless times dealing with more than he could handle, he fought with everything he could. He tried to fix things with his family, friends and the world around him.

When things finally started picking up, he thought the struggle was over. But yet again, things turned for the worse quite suddenly. He was beaten, robbed, harassed, and dealing with overwhelming feelings. But he still overcame the odds. It was a cadence of abomination that goes to show you that his metal infused heart was strong. And by god, if this man can lose almost everything, be discouraged, beaten, broken, and bruised inside – scared for life, in this case – and still overcome, that's truly saying something.

Overcoming life's challenges and all the negativity is a powerful feeling and can be inspiring for others. My friend has truly inspired me. And the music inspired him. The lyrics, the instrumentals, the passion all had a major impact on his perspective. He is, without a doubt, a shining star in this world. The metal community had reached out to him and gave him the willpower he needed to stay alive inside and give life everything he's got.

This is a story I will never forget. I'm hoping everyone will feel the same, whether you are fighting for different reasons or going through a similar experience, we are all in this together. Anyone can push through anything. You are a being of limitless potential. Passion and truth are the fire and metal is the fuel. Let it continue to change lives and continue to inspire your own. Stay metal, my brother. We will rise up!!!! \m/ 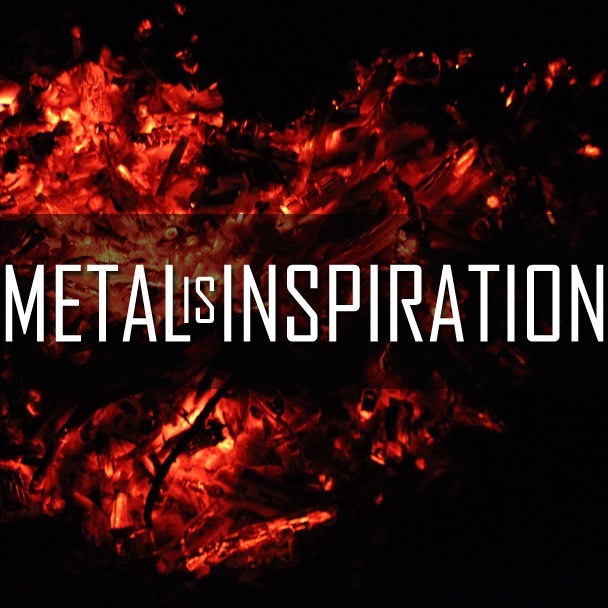