COUNTDOWN TO TECHFEST – Line Up Changes!!!! 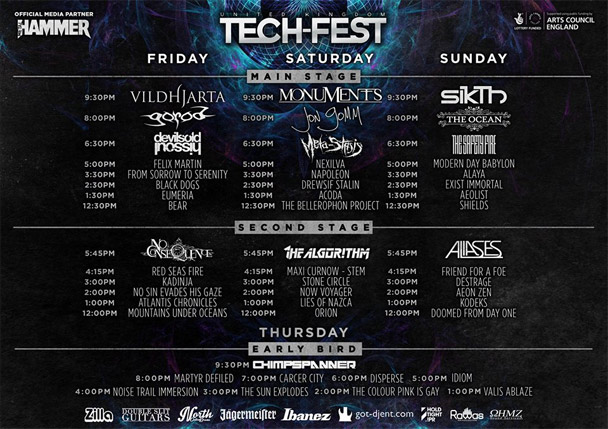 You may have already heard as since the news was announced last night opinions, regrets and statements of positive spin have been flying around all forms of social media; that several bands have had to pull out of appearing at the Festival, now just 3 days away from starting.  The most high profile of these being The HAARP Machine and the very sad absence of Serbia's Destiny Potato.  The organizers of UKTF have released the following statement explaining the situation:

"Line Up Amendments/Cancellations!
The|HAARP|Machine have cancelled their exclusive reunion at Tech-Fest 2014, the bands official statement is "The Haarp Machine is not ready".
The Eyes Of A Traitor have had to cancel due to Jack their vocalist being double booked with Empires Fade.
Destiny Potato + David Maxim Micic have had to cancel due to personal issues at home, please send them all your love and support!
Deadly Circus Fire and HORD have also both cancelled due to illness, we send them our best wishes in getting better.
Also due to logistical issues DispersE are switching places with From Sorrow To Serenity!
We apologize to all those affected by these changes, each circumstance was completely out of our hands. With all of these bands cancelling in the final week before the event we have done our best to secure the best replacements possible at such short notice!"

You may be as upset as I am about some of this information BUT the TechFest crew has been working their tiny backsides off to find suitable replacements. Considering the short notice, they have done a quite miraculous job of it.

I managed to have a brief chat with organizer, Simon Garrod, as he announced the replacement artists.

"Late cancelations like this cant be helped, it happens even to the biggest of festivals.

We managed to find replacements to fill all the slots in a matter of days. There are some bands we didn't contact due to plans already made for Tech-Fest 2015 and we didn't want to draw away anything from next years festival plans.

Regardless, I'm very positive about the bands we chose to fill in, all have new material to play or haven't played at Tech-Fest before, so expect to be amazed by them all.

We thank the fans for being so supportive and understanding, and we thank the bands that dropped their plans and committed to getting themselves to Tech-Fest at such short notice."

Obviously these things are disappointing, I myself will be most sad about not seeing Destiny Potato, however life goes on and it will still be an incredible weekends music with some downright incredible bands playing and there will be Vibes, vibes, vibes.  Vibes are far as the eye can see.

Now for a brief rundown of the new acts.

META-STASIS formed in 2012 through the Zygotic union of two of the vilest genetic mutations around, Sikth & Ted Maul.  Originally started as a studio project, META-STASIS have swiftly developed into one of the most ground breaking extreme metal bands in the UK. Combining psycho-extreme-tech-death metal and industrial/jungle, instantaneously you will find yourself lowered into the darkest depths of madness.

EXIST IMMORTAL have long been favourites of ours here at The Circle Pit for a couple of years and we rewarded their magnificent debut album 8.5/10 when we reviewed it recently.  As well as being some of the finest musicians that the UK has to offer, their vocalist Meyrick is the owner of some of the silkiest vocal chords in these fair isles.  I've been spinning their gorgeous LP like a plate since it emerged a few weeks ago.  Check it out and get down the front for their TechFest Set.

MAXI CURNOW, as well as being an incredibly talents writer/arranger/singer, is also a big hearted and generous individual.  As all the proceeds from his STEM ep go to an Indian Orphanage.  The EP features Mike Maylan (from Monuments) on drums as well as a host of guest musicians.  The TechFest performance will be the first live airing of STEM and is certain to be an incredible event.  Have a good listen on his bandcamp and help out if you can.

According to their facebook page, BLACK DOGS are "an unstoppable pack of northern bastards."  What else more can I say.

ACODA don't mess about.  They have recently scoured the nation, on a country wide Headlining tour; eviscerating town after town with their Post-hardcore savagery. If you like you tempos high and Powerful Alternative Metal these are your lads.

STONE CIRCLE formed in 2004 with Joe Ashwin (Lead Guitar/Vocals), James Pearce (Bass) & Sam Hill (drums), the lineup was then completed when Tom Skelton (Rhythm Guitars) in 2005. Over this time the band developed their sound into the progressive metal that they play today, inspired by Opeth, Katatonia, Morbid Angel, Gojira, Amorphis and more.  They play the second stage on Saturday at 3pm.  There are no clashes between the 2 stages and therefore no excuses, be there for them!!  In fact, be there for every band!!

Till next time my Friends.

Be good to yourselves and each other!