Rings of Saturn have unveiled details on their upcoming album, "Lugal Ki En"! What the hell does Lugal Ki En mean, you ask? Allow guitarist Lucas Mann to explain…

“The concept of the album in a nutshell is that long after the aliens conquer humanity, they evolve to a point where they transcend space, time and reality to take their conquest into the realm of the gods where they wage war on angels and demons. The album title Lugal Ki En translates from ancient Sumerian cuneiform to mean ‘King Of The Earthlings, Lord Of The Cosmic World.’ The Sumerian cuneiform is visible behind the English pronunciation of the album title.”

The album has officially been scheduled for a October 14th release date via the legends at Unique Leader Records! You can take a look at the expanded version of the artwork for "Lugal Ki En" below, courtesy of Mark Cooper from Mind Rape Art! You may also feast upon the track listing. 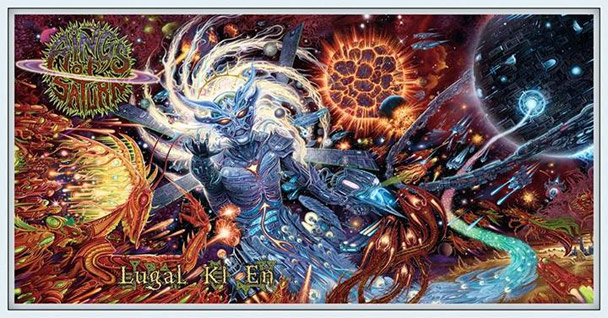