Here at The Circle Pit, We set great store by our ability to bring you the best in vital, new Metal.  Week after week, we listen to hundreds of hours of music and pass only the very best onto you beautiful people out there in Internet-land.  And occasionally a band comes along that strikes us as being so packed with potential and talent that we just have to put our name behind them. Hieroglyph is the latest band to receive this endorsement.

Based in Leeds and London this 6 piece posse of progressive poise and percussive prescience started life as the bedroom project of Sam Butterfield but quickly morphed into something more tangible. This was instigated by the addition of high-class low ender, Helen and bombastic bateur, Bradie.  Further bolstered a few months later by the recruitment of guitarist, Jamie, they paid their dues as a 4 piece instrumental unit for just over a year before adding the versatile vocals of Mark Howes and Valentina Reptile in early 2014. It is in this form that they have written their new material, which we are both proud and excited to present to you!

A Techy-Progressive mixture with a real compulsive, sinuous groove, Weyland-Yutani beguiles the ears with its telling use of engaging dynamics.  But don't take my word for it.  Have a listen through the link and join me below for a chat with the band. 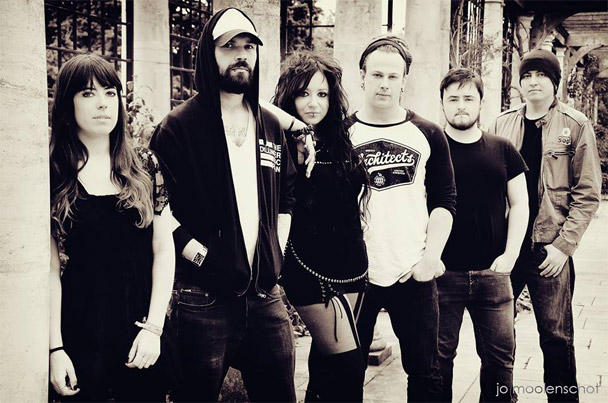 – What are the difficulties and benefits to being a 6 piece band?

Band discussions are a good as well as a bad thing. We’re all quite opinionated so discussions can be a nightmare and last forever but at least when we come to a decision we know that’s in been argued to death and we’ve arrived at the best solution.

The difficulties are merely logistically getting all 6 of us to gigs and practices, especially as Mark is the only one with a car. Stage space is at a premium and none of us are particularly reserved on stage so we always end up bumping into each other.

The benefits are awesome though, we're more spread out so we know more people and places than we would if there were fewer of us. There are more ideas and influences from everyone which makes it amazing to come up with new concepts and songs. Stuff also costs less as we split it six ways.

– Why do you have 2 singers and why do you think more bands don't?

It wasn’t an initial plan to get two but we had a long issue with trying to get a single vocalist who could sing and scream, we went through so many trying to find the one and annoyingly there were quite a few flaky people who just slowed us down. When Jamie joined as the second guitarist we made the decision to just start gigging instrumentally while we kept looking.

Mark then got involved but although he has an awesome scream he can only sing three notes and we still had more melody in mind always with the intention of incorporating clean vocals eventually. Val then got in touch and it sounded class – the contrast between screams and cleans really complement each other. Mark and Val rarely tread on each other's toes, the lyrics seem to match and they have a natural feel for who should be singing at what point in the songs.

Lots of bands are able to accomplish what they want with a single vocalist and often bands who have two vocalists end up having a nightmare if they leave (Sikth, Monuments). It depends primarily on how many seats your vehicle has and sometimes creative preference. We’re still ironing out the finer points of a two-vocal approach, but having two singers is definitely one of our strong points now.

Mark: As for why more bands don't do it, I can only surmise that Linkin Park ruined the concept. Wankers.

– Is the distance between band members a significant challenge and how do you overcome it?

There's only Val who lives away from Yorkshire, but we make it work. The travelling can get expensive but it does effectively give us bases in the north and south which is cool. We have to constantly keep it in mind that we might not get x member to y place in time if z member doesn't finish work till whenever in whatever town…

Writing wise, it hasn’t been too problematic so far because most of the music was recorded by Sam at home and Val wrote and recorded her parts in London and sent them up, but to collaborate more effectively and contribute more evenly I think there will be a lot of skyping/sleepovers going on in future.

To be honest, if Skyharbor can do it with members in the USA, UK and India I think we can manage Leeds and London.

– You are headlining a dream show, who else is on the bill?

Jamie: This is one of those questions I like to think about a lot, with a lot of bands, I’ll just stick to 3 Animals as Leaders, Sikth, Meshuggah… no wait 4… Between the Buried and Me too.

– Who is the fan of the Alien films and what is the single about?

Jamie: I think we’re all fans of the Alien films though I could be wrong? I have absolutely no idea what the single is about… I should probably find out haha.

Sam: I titled the song Weyland-Yutani because I wrote it while I was having an Alien session at some point last year. I realised I had to start giving demos actual names instead of key mashing after hitting “save”, this was one of the less stupid names I’ve christened tracks with.

Val: Unexpectedly it fit very well with the EP concept, which is a vision of our society through the eyes of the individual and the collective and states how media, corporations and generally all the corrupted powers out there want to control people feeding them bullshit and lies to make them sedated. Weyland Yutani takes inspiration from the famous Weyland Yutani corporation (symbol of a corrupted controlling elite) in a metaphor which compares it to the modern world finding a lot of similarities.

– You’re in a futuristic prison where you’re not allowed to listen to any kind of metal/rock – what music do you listen to?

Sam: EBM/Industrial stuff, kind of fits the setting! Or any kind of screwed up electronic stuff like Aphex Twin or Venetian Snares

Jamie: Ever heard of New Retro Wave? Simple electronic music that has a similar sound to 80s movie soundtracks, kind of like the stuff Kavinsky did for the movie Drive and Daft Punk did for Tron Legacy. That’s what suits a futuristic prison to me.

Helen: Definitely jazz and classical, both genres I love just as much as metal and rock.

Hieroglyphs new Video Weyland Hitami is available to view right now on our Youtube Channel, TheCirclePitTV. The Track is taken from the EP Freefall, which is availble from Monday the 18th of August via Bandcamp

They also have 2 shows coming up: Friday 8th of August, Headlining @The Black Heart in Camden, London. and the 25th of August @The Kraak Gallery, Manchester, supporting Mask of Judas.

If you’re near either venue, get yourself along there, see them kick arse and avail yourself of some of the friendliest Tech Metal merch I’ve ever seen!!