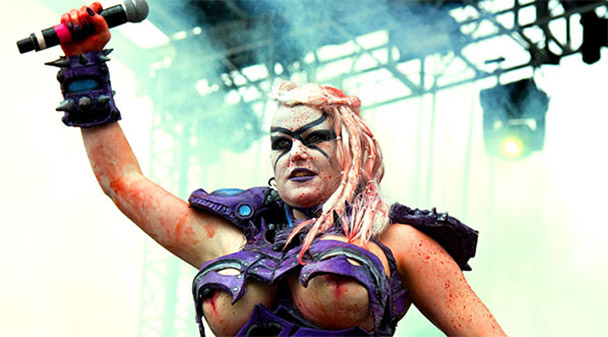 For those of you who haven’t heard, GWAR have officially introduced the new helm of the band – with a surprise twist! The band now has a frontwoman who goes by the name of Vulvatron (tehe). Rumor has it she may be of two new fronts to the band.

Meet Vulvatron, a spiky purple Amazon whose massive (prosthetic) breasts occasionally shoot geysers of blood out onto her hapless audience. Vulvatron is not dancing, or breathing fire, or keeping the slaves in line (though one assumes she’ll be adept at all three). For the first time since the departure of dancer and backing singer Slymenstra Hymen (Danielle Stampe) in 2000, GWAR has a female member, and she’s the frontwoman.

In the grand scheme of things, this changes a lot. And let’s face it… NO ONE can replace Oderus Urungus. But it’s good to see the band moving forward despite the tragedy, surprises and all. GWAR is coming to drench a venue near you.