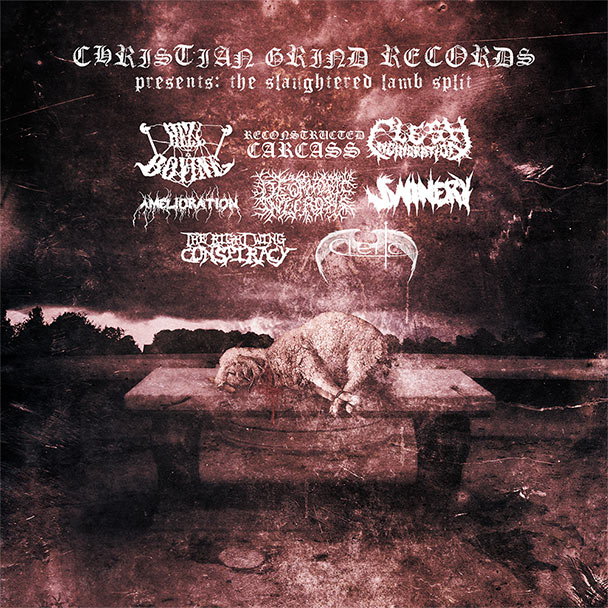 I'm sure this may be a shock for some of you, but Christian grindcore exists!

Now seven years later, every one of those bands have disbanded. People died. People left Christianity. And other people just faded away. Now a new breed of Christian grinders have united, hoping to start something new, thus the creation of the "Slaughtered Lamb Split."

This monsterous split has been delayed a month already but will be released digitally on November 23. You may pre-order the digi-sleeve and immediately receive a free download of split filled with 67+ minutes of grinding madness! The physical release will be able to be shipped before 2015. If you do not live in the United States, you will have to email the label. ([email protected])

Flesh Incineration is the definition of modern grindcore. The sole member, Luke, has mastered his skills at combining many metal elements into his grind such as thrash breakdowns, basic death metal riffing, and brutal yet understandable vocals!

Cleric plays a form of deathgrind with powerful rhythms. With influences such as Nasum and the grind-god Napalm Death, Cleric is serious about his grind. He has strong riffs and deathcore-ish vocals.

Amelioration is probably the most obscure grindcore project you have ever heard. In one song you'll heard low grindcore vocals, a dropped dubstep beat, and fast paced programmed drums. If you're wiling to risk your ears to something new then listen to Amelioration!

Swinery is the solo project of the label owner, and combines deathcore with grindcore. Using the speed of grindcore and the riffing and breakdowns of deathcore, Swinery is attempting to make create a new sound.

The Right Wing Conspiracy is a grindcore band with a goal of exposing government and religious lies by using their blasting programmed drums and noisy guitars and vocals! They are also heavily influenced by punk; several of their songs rely on fast punk beats to direct the direction of the songs.

Hell Bovine is an experimental noisegrind project that is determined to stretch your musical ears. With random blasts and obscure riffing with bass guitar and electronic noises, Hell Bovine has no equal and follows no standards or rules.

Reconstructed Carcass is a grinding gorenoise project, a true raw sounding vibe. His music declares liberation from popular music's aesthetic purpose and is only for those truly dedicated to grind and gore!