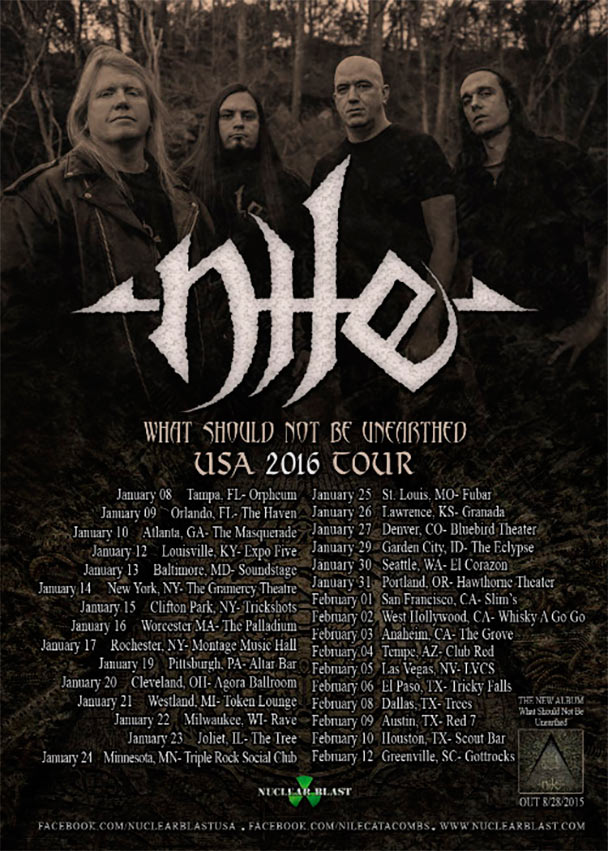 Nile have just announced a 2016 Winter tour for the United States! The expansive trek will take place from January through February. No direct support acts have been announced as of yet. However, it has been announced that local bands will be supporting every night of the tour. You can read over the official press release below and scope out the dates on the flyer above!

The reigning kings of technical, historically-themed brutality, Nile have announced a momentous 31-date trek across North America in 2016. The tour launches in Tampa, Florida on January 8th, hits New York, West Hollywood, Pittsburgh, and wraps up at a very special hometown show in Greensville, South Carolina on February 12th.

Nile mastermind Karl Sanders checked-in about their 2016 tour: “We are extremely happy to bring our new album What Should not be Unearthed to Nile fans in the states. We will of course be playing a wide variety of classic Nile tunes as well each night as we take this tour to US cities both familiar and new to us. As long time supporters of the metal underground, Nile is also happy to announce that This tour will be further blessed by having local metal bands in each city as support acts. Also noteworthy and of special meaning to the band, is the homecoming show at the close of the tour; it has been ten years since we have played in our own hometown. Join us for an extreme evening of brutal metal!”