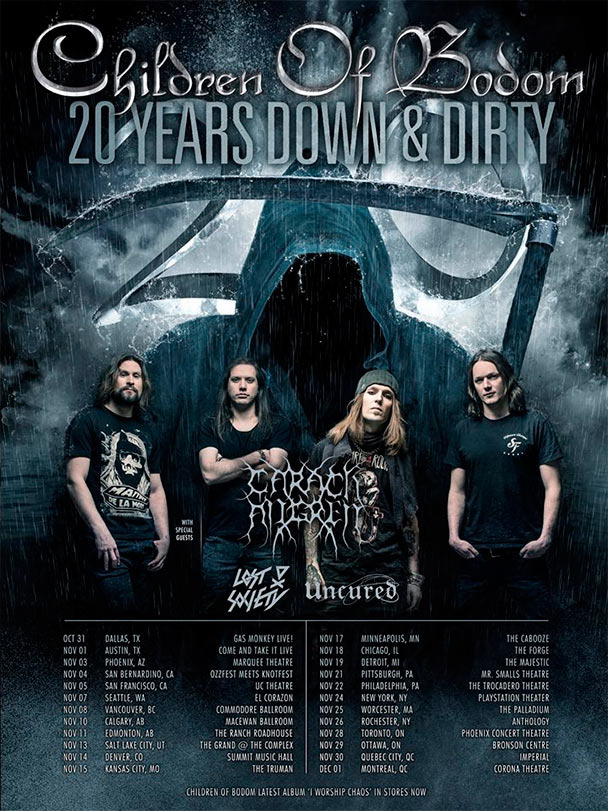 Children of Bodom are celebrating 20 years since the release of their debut album “Something Wild”. The latest move in support of this is the announcement of a North American tour in conjunction with Carach Angren, Lost Society, and Uncured. You can check the dates on the flyer above and read over the band’s official statement below.

Finland’s melodic death superstars CHILDREN OF BODOM are returning to the states this fall for a mind-blowing celebration of 20 years since the debut of Something Wild and the beginning of the Hate Crew.

The 24-date tour will kick off on October 31st in Dallas, Texas with appearances at this year’s Ozzfest Meets Knotfest, 7 Canadian dates before concluding in Montreal on December 1st! Joining the band on the momentous occasion are Dutch masters of horror Carach Angren, Finnish thrashers Lost Society and New Jersey progressive, technical death metallers Uncured.

Alexi comments: “So my friends, after rolling thru Europe doing the 20th year anniversary tour, we were honestly pretty bummed out to find out that we wouldn’t have enough time to bring the tour to America since it was absolutely a blast for both the crowd and the band. But now I’m stoked to announce that as it turns out, we indeed will be able to do this on the other side of the pond so I’m over the top happy about that!! Remember guys, this will be a once in a lifetime experience seeing us playing all kinds of obscure tracks off the first album, stuff from the 2nd & 3rd albums that we ain’t played in over 15 years and the general rule really is that there will not be a single song newer than the Hate Crew Deathroll tracks so it’s all about old school COB! So even if Something Wild isn’t your favorite album, I can guarantee that it will be entertaining, nostalgic and flat out funny as hell to be a part of this madness so that’s one party you just cannot miss! I hope to see you there ladies and gents!”