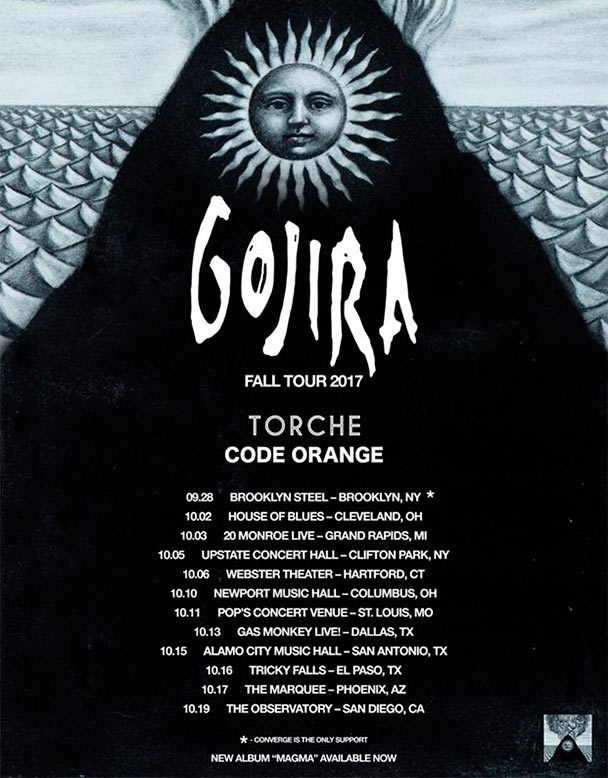 Gojira, Torche, and Code Orange will be teaming up for a United States tour this Fall! You can find the dates on the flyer above and music from all the bands down below. Here’s the official press release in support of this venture as well:

Gojira have announced details of a U.S. headline tour with special guests Torche and Code Orange which is set to get underway October 2nd at the House of Blues in Cleveland, OH (see attached itinerary). Artist presale tickets for the new headline dates will be available today at 2:00 PM local time, followed by a Spotify presale on Wednesday, August 9th at 10:00 AM eastern time and finally a venue / promoter presale which begins Thursday, August 10th at 10:00 AM local time. Tickets for all dates will go on Friday August 11th at 10:00 AM local time.  For tickets and more information on the upcoming tour, please visit www.Gojira-Music.com.

Gojira are currently out on the road wrapping up a run of North American dates on Metallica’s WorldWired Tour which will continue through August 16th (see attached itinerary). The west coast trek also includes a string of Gojira headline dates with Pallbearer that run through August 12th.  This fall, Gojira will make an array of U.S. festival appearances with performances set for Louder Than Life (9/30), Rock Allegiance (10/7), Houston Open Air (10/14), Aftershock (10/21) and more.  The upcoming fall dates will also include a very special one night only performance with Converge at Brooklyn, NY’s recently opened Brooklyn Steel on September 28th.

Last year Gojira’s  MAGMA staked its claim amongst the best albums of 2016, earning Metal Hammer’s coveted “Album of the Year” title while also landing  on Rolling Stone’s “Top 20 Metal Albums of 2016,” Consequence of Sound’s  “Top 50 Albums of 2016” / “Top 10 Metal Albums of 2016” lists, and Pop Matters’ “Best Metal of 2016” recap. Additionally “Stranded,” the lead single off of MAGMA, was named one of Stereogum’s “100 Favorite Songs Of 2016.”  MAGMA also earned Gojira their first ever Grammy nominations for ‘Best Metal Performance’ and ‘Best Rock Album.’  Gojira’s crushing track “Silvera” received a nomination for ‘Best Metal Performance,’ while their MAGMA was nominated for ‘Best Rock Album’ at the awards.

Gojira’s MAGMA took the #1 spot on Billboard’s ‘Hard Rock Albums’ chart upon debut, making Gojira the first French band to hold the #1 spot on the chart in its nine year existence.  The release of MAGMA marked the highest chart debuts of Gojira’s career landing them at #4 on Billboard’s ‘Top Rock Albums’ chart, #6 on Billboard’s ‘Tastemaker Albums’ chart and Top 25 on the ‘Billboard 200.’ Furthermore, Gojira earned career high chart positions around the globe including Top 10’s in France, Canada, Switzerland, Austria, Finland, and Norway with Top 15 debuts in Australia and Germany. MAGMA is available at all DSPs and at www.Gojira-Music.com in a variety of exclusive bundles.