NMAC Interview – A Look At The German Nu Metal Revival 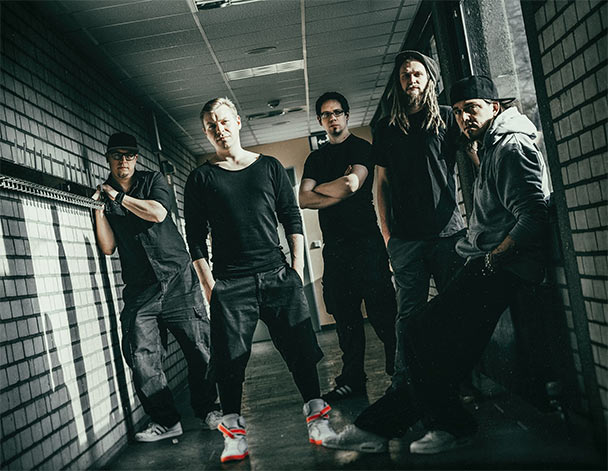 Nu Metal stood amongst the forefront of popular music at the turn of the century. Love them or hate them, bands like Korn, Limp Bizkit, Linkin Park, Slipknot and a multitude of others absolutely dominated the charts at a point. Many of these groups are meeting waves of success to this day but maybe in lesser degrees as the style subsided over the years.

However, in recent history, people have been referring to something that has been coined the “nu metal revival”. A number of bands are starting to come from the woodwork of the underground boasting this nostalgic sound and some established acts are beginning to turn towards it. Furthermore, there’s been relative success on these fronts! It should be interesting to see what it spawns into again moving forward.

This recent phenomena isn’t restricted to any one territory either. It’s happening across the globe…

… That brings us to Germany. A band by the name of NMAC made their “First Strike” last year with an EP entitled exactly that! They’ve been hard at work ever since cooking up the right hook which brings us here today.

This year, NMAC launched yet another EP by the name of “Split Second”! If you take a moment of your time to listen, you might just like it! Dig in further, and you may also find pockets of that golden nostalgia skirting the year 2000.

Given all this, we’ve taken the time to catch up with NMAC to gain further insight to the current stages of the Nu Metal revival within Germany. That being the case, you can see what they have to say through the interview below! You can also flip through some of their streaming tracks for a listen. If you enjoy what NMAC is doing, you can also follow along with their work over on their official website, Facebook, Instagram, and YouTube.

What does your name NMAC stand for?

As almost every band nowadays, finding a band name could be a serious pain in the ass. Same with ours…Long things short, we wanted to keep it short, in your face and easy to remember. We ended with NMAC as its the Short version for “Nu Metal Allstars Cologne”. We’re all playing in bands for ages, we love Nu Metal and we’re based in Cologne, Germany. So – think big!

You guys clearly work hard. You’ve independently released 2 EPs back to back. Can you tell us a bit about that process? Any triumphs or challenges?

The first EP just came out pretty fast and naturally because the music was mostly written when I joined for Vocals. It directly clicked, I wrote my lyrics and within three rehearsals we had the missing Track “Transgression” done. During the recording of the first EP, we already had ideas for new songs in mind. So we sat down and discussed what to do: Waiting for enough tracks to put out an album? Release the first four tracks as an EP? We decided for the EP to get things going, find shows to play and get out of our basement rehearsal room. As the Ideas for “Split Second” took shape we decided to keep a straight process rolling and push out EPs once a year instead of waiting for enough material for an album. From my point of view, it’s hard to keep someone on track for 40 minutes plus. So, we keep it quick and dirty, in your face and hope that the people want more. Beside that, we’re pretty focused when being together – practice, play live, promote, merch – we like to keep everything in our own hands but also enjoy helping hands and support if its helpful!

Are there any tracks that you’re most proud of?

I think, I can speak for all of us: We’re proud of every note recorded! And we’re even more proud to play them live and see the audience enjoy what we created. Personally, I like playing “Battle Ready”, “Bulldozer” and “Transgression” live…I can bang my head, get into the crowd and have my interaction. Perfect match.

Can you tell us about the concept behind your latest EP “Split Second”?

We don’t have a real concept for the EP’s. “First Strike” was our first effort, “Split Second” is the second one. Only thing we’re trying to focus is keeping numbers as part of the EP names. But, I would love to do a concept thingy one day, songs that connect musically and lyrically. I guess this will be our masterpiece then, so – we got some time for that!

Any current plans for future releases?

Right now, we’re already working on three new songs in parallel. We’re sticking to our working ethics to never skip rehearsals and evolve constantly. My personal goal is to release at least in spring 2019.

This is a bit of cliche question but it seems appropriate here. What bands would you consider to be your influences?

All of the band love the Nu Metal classics: hedPE, Korn, Bizkit, Slipknot, Static-X and so on. For me, I have influences from Hip Hop (Currently digging the $uicideboy$, Ghostemane and Pouya), Death and Black Metal, Classical Music and everything else. I am focusing on emotions and melodies and thick beats – if something catches me, I’m on. And my first band back in the days was a Bon Jovi cover band, nuff said :)

How do you feel about the state of Nu Metal music in 2018?

Hm, don’t know if I am the right one to give an appropriate answer to that. But, if we’re looking at YouTube and stuff: Slipknot, Korn – Still there! Bizkit touring Europe again (and we’re trying to get the local support slot for a Show at our region). I would say: Survival of the fittest. And we got some new bands coming up and mixing the Nu Metal Vibe with fresh ideas, like Alpha Wolf from Australia. Good stuff is still on the map, hope we’ll also get some good feedback for our music as well.

More specifically, how do you feel about the current landscape for Nu Metal over in Europe?

I think, we’re still pretty strict and elitist – Haters gonna hate. Magazines nowadays are focusing on the big names, old school metal or vintage stuff. Especially in Germany, we have some big magazines which, from my point of view, only focus on the same names or a style that is way beyond modern or open minded. BUT – we’re getting shows done, we’re getting offers and people come out and enjoy. The underground is still digging bands that play their asses off and give the heart with every note and word.

“Bulldozer” – when the crowd joins for the “MOVE” in the chorus! That’s a blast, totally. And seeing dudes and dudettes banging their fucking heads with me or just move to our tunes. Priceless!

Are there any NMAC shows you have coming up?

Luckily, we got a bunch coming up here in Germany. Club Shows, some small festivals, everything really non profit. But we’re not in for the money, we’re in for the fun and the music itself. And we like to hang around with each other and our sixth unoffical band member Dirk – If you need merch, want to book us or need anything from the band, stick to the Beard of Doom a.k.a. Dirk!

If you could put together and play a dream festival with any bands / artists, who would you choose?

Hah, you asked for it: My perfect festival would be a Metalpalooza thingy with everything I like: I would love to play with NMAC. I want Dimmu Borgir playing, Pouya, Ghostemane, Public Domain, Monuments, Thy Art Is Murder, our friends in Cell (also from Cologne), my other band SPHEAR. Also want to have Sarah Howells doing some acoustics. Ah damn, Electro Floors, DubStep…So many bands, if I name every band or style, that would be a two weeks festival. But I will definetly not be the average gig!

Do you have any before or after show rituals?

Hehe, depends on who is driving, but some actions begin to repeat each show, so we can call it a ritual. FJ (our guitarist) and me will be definetly doing Jägermeister. We all do a little stretching pre show, we watch the support bands if we’re not opening ourselves. We love to talk to everyone and as we’re not that big to have roadies we’re also setting up the stage and amps and everything. Me, personally, I try to smoke less than normal, which is not an easy thing. And I love to sell our merch, so, when I am not on stage or at the bar, you’ll find me smoking or at our merch booth with beardy Dirk.

Another hypothetical! If NMAC had to spend 1 million Euros in 24 hours, how would you spend it?

Good thing to ask me, if you had asked the others there will be a gazillion of drum shells and amps and guitars. I would like to buy a touring bus, an industrial space which can be converted into a place to rehearse, to record and to hang out with miniramps, Basketball and stuff. We definitely would invest stuff in promotion and merch, a lot of money probably. AND of course we would buy gear and use parts of the money to get some cool videos done. Maybe we also buy our own screenprinting gear. Give me the money and we’ll see, but I can surely spend it.

That’s all we have! Any famous last words for the people out there?