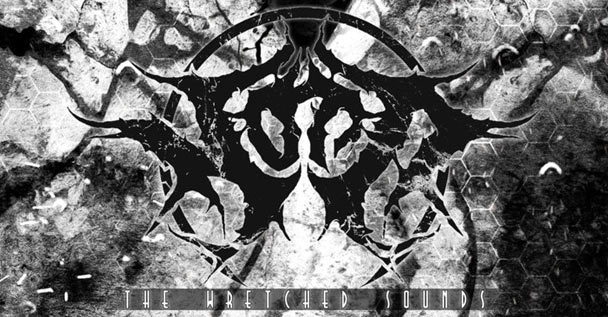 Seek shelter… The world is not prepared for Nott! Much like the return of Cthulhu, we’ve been dreaming of this devastating moment for some time now. Four years after the “Abyssal” EP fed black ooze through the speakers of this world, we’ll all be forced to purchase new sound systems once again…

The time has come to experience “The Wretched Sounds” first hand! This is the long awaited, very violent re-introduction into the realms of Nott. It’s currently available for purchase through a number of awesome packages / items over on the official Nott merch store and Bandcamp. Digital orders can, likewise, be grabbed over on Bandcamp. Be sure to act quickly because items appear to be selling out fast! …With good reason…

This album can easily be described with various synonyms for the word “big”. In fact, expect to see a lot of that throughout this review because it’s just the god damn truth about this LP. It plays out like an extinction level event slowly unfolding from start to finish and, therefore, is sure to leave an impression on many listeners.

More impressive yet, Nott is the brainchild of a single artist! It’s hard to believe such gargantuan efforts come from a single soul but it’s the complete truth… Brought up from the Alaskan cold, Tyler Campbell pushes his creativity through this solo project and achieves some truly magnificent results. At a base level, he brings about colossal Deathcore music. In reality, he does this by throwing several other metallic sub-genres into the blender as well. This includes a mixture of Doom Metal, Death Metal, Progressive Metal, and (un)healthy doses of experimentation. It all amounts to a commendable and slightly terrifying sound sure to give your neighbors some nightmares when played at appropriate volumes. It’s almost worth the tinnitus!

The introduction to this album is strong to say the least. A split moment of silence drops suddenly and quite dramatically into an enormous sonic space. “Conference of the Arcane” feels like falling through a bleak and unforgiving chasm, pulled down by the gravity of impossible depths. This impressive sound design is then matched with some absolutely demonic growls rising up before the impact of this fall comes full circle…

Seemingly out of nowhere, the title track hits hard. This kind of shock can immediately reel in the listener’s attention. These extreme sonic shifts are common on the dangerous soundscapes of “The Wretched Sounds”. All in all, this introductory duo serves as a great representative of what to expect on this recording while simultaneously holding a number of cards to the chest. Never underestimate what Nott has up the sleeve!

The opening track also features a cameo from no less than Traitors’ vocalist Tyler Shelton who delivers an absolutely savage performance. This is not the only notable collaboration to be found on the record. None other than the Australian Deathcore legend / Thy Art Is Murder frontman CJ McMahon brings his talents to light on the second to last number “Terminus I – Barren”. These features are cool and all but they come nowhere near outshining the efforts of Tyler on this record – rather complimenting the chops of this band’s sole performer.

Listening to this collection of evil tinted sounds is like having one’s features constantly twisted into a “stank face” (that’s meant in the best way possible). The whole effort is so disgustingly heavy and unbelievably large in scale that it’s sure to leave some sort of crater in the consciousness of expectant and unsuspecting listeners alike. Some of the impacts on this record will likely get surrounding territories into some Nott as well. Every track seems to have a jaw dropping moment of some sort – whether it be a blistering blast of the drums, death defying drops, or mind twisting experimentation. There’s a good bit to discover here.

8 tracks may not seem like a lot, especially when two of them clock in at under 2 minutes. However, this whole experience is certainly a case of quality over quantity. This is essentially 35+ minutes of facing down doom itself within your ears. There’s undoubtedly replay value to be uncovered from the cavernous abyss of Nott. Not a single track present is unworthy of attention.

In fact, this is arguably one of the strongest Deathcore related offerings that 2018 will see. The entire album experience flows together very well and it’s very easy to get lost in a loop of leaving “The Wretched Sounds” on repeat. In the process of writing this review alone, I’ve experienced the record some stupid number of times and will likely keep it in rotation for some time to come.

The production and sound design behind this album are just sublime. Every impact can be felt reverberating through the world around you and the sonic palette is just mountainous. I’ve been listening to Nott’s work for years now and this is easily his best sounding release to date. It would appear that this end of the record was handled by Tyler himself in conjunction with the clear talents of Lance Fohrenkam who handled mixing, mastering, and also collaborated on the engineering. Nicely done.

I don’t personally have anything negative to say about this experience. Now, objectively speaking, if the idea of trudging through swamps of blood left by an often slow tempo, bone shattering album doesn’t appeal to you – Nott may not be your cup of tea. The violent consistency is broken up by moments of respite such as “Devoid” but the LP likely isn’t for everyone… especially not mothers. I would never show my mumma this album because I love her too much.

To sum things up, this release inspired me to build a doomsday bunker. On a more serious note, “The Wretched Sounds” is ridiculously enjoyable in my opinion. The pulverized pit of my gut is feeling a 9 out of 10 on this one. If you enjoy heaviness in any way, shape, or form – definitely give this album a go!

It’s also worth noting that all three previous Nott EPs, “Obsidian Depths”, “Devouring Deities”, and most recently the aforementioned “Abyssal” EP are all fully worth experiencing as well. So, if “The Wretched Sounds” is up your alley, it’s highly recommended that you dig deeper. You can start by CLICKING HERE or heading over to Bandcamp.

Furthermore, we recently had a chance to speak with the man behind this project directly. Keep your eyes open for the Tyler Campbell interview landing on a webpage near you!

Once again, the album is currently available for purchase through Nott’s official webstore and over on Bandcamp. Go get it! Other ways to support this music include social networks. Feel free to give Nott a follow over on Facebook and YouTube and see what he cooks up next!