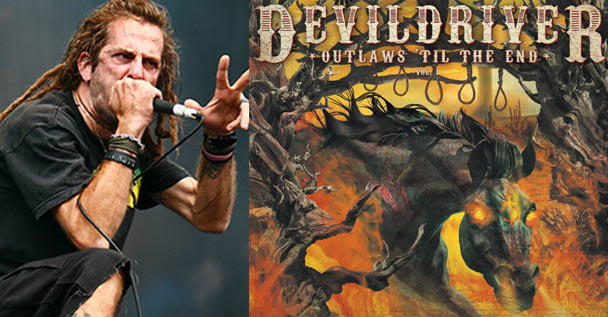 Interestingly enough, the Groove Metal unit Devildriver are amping up to release a country music cover album this year. Thus will go onto see the light of a southern day July 6th of this year through Napalm Records. You can learn much more about the project by CLICKING HERE.

In support, the band just released their cover of Johnny Cash’s “Ghost Riders In The Sky”! It features no less than Lamb of God’s Randy Blythe, Johnny Cash’s only son John Carter Cash and his wife. You can enjoy here:

Devildriver frontman Dez Fafara had the following to say of this, “It was both an honor and a privilege to work with these three great artists. Watching John Carter Cash and Ana Cristina Cash track vocals at the Cash Cabin was a highlight of my career. Meeting such down-to-earth and incredibly talented people and having them come on board “made” the project for me, personally. Tracking with Randy was another highlight. He’s a brother and watching how he tracked, and vice versa, was a learning process for both of us that we both spoke highly about and enjoyed immensely. All of us on this song gave 110% to make sure it was done right! Enjoy!”

Johnny Cash’s son John Carter Cash said, “All my life I have loved the power and eerie quality of the song ‘Ghost Riders in the Sky’. Since I was nine years old, I have lived and breathed heavy metal music. I am grateful to have had the chance to work with Dez Fafara, Randy Blythe, DEVILDRIVER and others, in the upcoming release of what I believe is the consummate metal version of this musical masterpiece.”

Ana Cristina Cash, wife to Carter Cash, says, “I am so proud to have been a part of Outlaws ‘Til The End: Vol. 1 and to have sung on the metal version of ‘Ghost Riders in the Sky’ with my husband John Carter Cash, Dez Fafara, Randy Blythe and DEVILDRIVER. This whole album pushes boundaries and merges the outlaw country and the metal genres in a masterful way.”

Finally, the one and only Randy Blythe had the following to say, “I am a huge fan of moody songs with narrative lyrics employed to tell a dark story – they really make the listener visualize what the song is about. I can’t think of many tunes where this was done more effectively than Johnny Cash’s version of ‘Ghost Riders in the Sky’. Long before heavy metal had been invented, the original Man in Black wasn’t afraid to explore the dark side with his music. Truly great songs never die – they just shape-shift through the years. Singing with Dez, John Carter, and DEVILDRIVER is keeping those undead riders alive in a whole different genre. Crank this up and look to the sky at night…”